The Mosquito Bowl: A Game of Life and Death in World War II (MP3 CD) 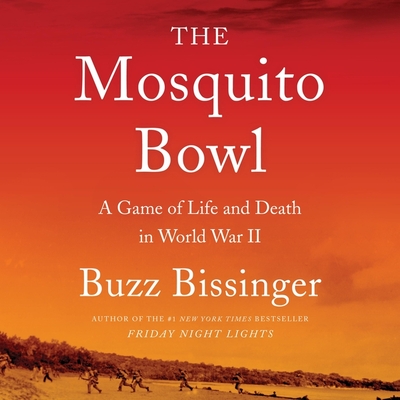 Pulitzer Prize winner Bissinger blends football and war stories in his latest piece of narrative nonfiction. He introduces readers to several college football players of the early 1940s — some of whom were All-American athletes — who one way or another found themselves in the U.S. Marine Corps during WWII. He centers his story around a football game played in Guadalcanal on Christmas Eve, 1944, between two Marine regiments who were training for the final assault against Japan. But it's really a story about the men who went on to participate in the lengthy battle for Okinawa, which 15 of the 60 football players in the Mosquito Bowl did not survive. Bissinger writes vividly of the Marines' experiences, but deals out the blood and suffering in small enough doses that readers can rise above the battlefields to ponder the bigger subjects of bravery and patriotism, as well as the luck and stupidity that characterize any war experience.

Buzz Bissinger's Friday Night Lights is an American classic. With The Mosquito Bowl, he is back with a true story even more colorful and profound. This book too is destined to become a classic. I devoured it. -- John Grisham

An extraordinary, untold story of the Second World War in the vein of Unbroken and The Boys in the Boat, from the author of Friday Night Lights and Three Nights in August.

When the Japanese attacked Pearl Harbor, college football was at the height of its popularity. As the nation geared up for total war, one branch of the service dominated the aspirations of college football stars: the United States Marine Corps. Which is why, on Christmas Eve of 1944, when the 4th and 29th Marine regiments found themselves in the middle of the Pacific Ocean training for what would be the bloodiest battle of the war - the invasion of Okinawa--their ranks included one of the greatest pools of football talent ever assembled: Former All Americans, captains from Wisconsin and Brown and Notre Dame, and nearly twenty men who were either drafted or would ultimately play in the NFL.

When the trash-talking between the 4th and 29th over who had the better football team reached a fever pitch, it was decided: The two regiments would play each other in a football game as close to the real thing as you could get in the dirt and coral of Guadalcanal. The bruising and bloody game that followed became known as The Mosquito Bowl.

Within a matter of months, 15 of the 65 players in The Mosquito Bowl would be killed at Okinawa, by far the largest number of American athletes ever to die in a single battle. The Mosquito Bowl is the story of these brave and beautiful young men, those who survived and those who did not. It is the story of the families and the landscape that shaped them. It is a story of a far more innocent time in both college athletics and the life of the country, and of the loss of that innocence.

Writing with the style and rigor that won him a Pulitzer Prize and have made several of his books modern classics, Buzz Bissinger takes us from the playing fields of America's campuses where boys played at being Marines, to the final time they were allowed to still be boys on that field of dirt and coral, to the darkest and deadliest days that followed at Okinawa.