Here We Are: A novel (Vintage International) (Paperback) 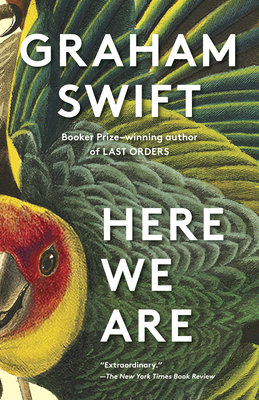 “Here We Are is a beautiful evocation of love, memory, and magic. With mesmerizing prose, Swift tells the tale of Jack, Ronnie, and Evie, who form a bond in the summer of 1959 when they work together at a variety show in Brighton, England. Ronnie hires Evie to be part of his magic act, and the two soon fall in love. Jack, the show’s master of ceremonies, is Ronnie’s best friend but he knows little about Ronnie’s childhood experiences during the war. Fifty years later, Evie is looking back at their lives and what happened during the summer that changed everything. This quiet, compact novel soars with the grace and poignant feeling of Swift’s masterful writing.”
— Lori Feathers, Interabang Books, Dallas, TX

It is 1959 in Brighton, England, and the theater at the end of the famous pier is having its best summer season in years. Ronnie, a brilliant young magician, and Evie, his dazzling assistant, are top of the bill, drawing a full house every night. And Jack is everyone’s favorite master of ceremonies, holding the whole show together. But as the summer progresses, the drama among the three begins to overshadow their success onstage, setting in motion events that will reshape their lives. Vividly realized, tenderly comic, and quietly shattering, Here We Are is a masterly work of literary magic.

Graham Swift was born in 1949 and is the author of eleven novels; two collections of short stories; and Making an Elephant, a book of essays, portraits, poetry and reflections on his life in writing. With Waterland he won The Guardian Fiction Award, and with Last Orders the Booker Prize. Both novels have since been made into films. His work has appeared in more than thirty languages.

“Once again, Swift has demonstrated wizardry in his ability to conjure magic out of ordinary lives.” —NPR

“A novel fueled by, and consequently alive with, creative brilliance and emotional intensity.” —Minneapolis Star Tribune

“A magical piece of writing: the work of a novelist on scintillating form.” —The Guardian

“Beautiful. . . . Neither trick nor illusion, but a flash of truth.” —The Wall Street Journal

“Swift captures the tragicomedy of life.” —The Washington Post

“Swift’s closing account of a mundane world momentarily pierced by a shaft of numinous mystery is magnificent.” —The New York Times Book Review

“One more brilliant example of [Swift’s] talent for pulling universal themes out of the hats of ordinary lives.” —Publishers Weekly (starred review)

“Beautiful, gentle, intricate. . . . Here We Are smuggles within the pages of a seemingly commonplace tale depths of emotion and narrative complexity that take the breath away.” —The Observer (London)

“There’s nothing extravagant or showy about Here We Are. . . . The book’s power comes precisely from the fact that it performs its magic in front of your eyes, leaving nowhere to hide. . . . You wonder how [Swift] does it.” —Financial Times

“A marvellous tale of post-war love and magic.” —The Daily Telegraph

“With a wizardry of his own, Swift conjures up an about-to-disappear little world and turns it into something of wider resonance.” —The Sunday Times (London)

“It is perhaps too simple to say that Swift creates a form of fictional magic, but what he can do with a page is out of the ordinary, far beyond most mortals’ ken.” —The Herald (Scotland)