The American Crisis: What Went Wrong. How We Recover. (Hardcover) 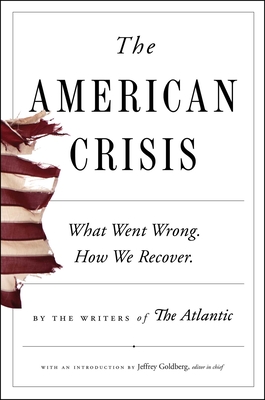 By Writers of The Atlantic, Jeffrey Goldberg (Introduction by), Anne Applebaum (Afterword by), Cullen Murphy (Editor)
$30.00

Some of America’s best reporters and thinkers offer an urgent look at a country in chaos in this collection of timely, often prophetic articles from The Atlantic.

The past four years in the United States have been among the most turbulent in our history—and would have been so even without a global pandemic and waves of protest nationwide against police violence. Drawn from the recent work of The Atlantic staff writers and contributors, The American Crisis explores the factors that led us to the present moment: racial division, economic inequality, political dysfunction, the hollowing out of government, the devaluation of truth, and the unique threat posed by Donald Trump. Today’s emergencies expose pathologies years in the making.

Featuring leading voices from The Atlantic, one of the country’s most widely read and influential magazines, The American Crisis is a broad and essential look at the condition of America today—and at the qualities of national character that may yet offer hope.

Jeffrey Goldberg is the editor in chief of The Atlantic. Before taking on this role, he spent nearly a decade covering politics and foreign policy as a staff writer for the magazine. Previously, Goldberg was a Middle East correspondent and the Washington correspondent for The New Yorker, and a writer for The New York Times Magazine. He is a recipient of the National Magazine Award for reporting, and is the author of Prisoners: A Story of Friendship and Terror.

Anne Applebaum is a staff writer at The Atlantic and a Pulitzer Prize–winning historian. Her books Gulag: A History; Iron Curtain: The Crushing of Eastern Europe, 1944–1956; and Red Famine: Stalin’s War on Ukraine have appeared in more than two dozen translations. Her most recent book is Twilight of Democracy: The Seductive Lure of Authoritarianism. Applebaum is a former columnist for The Washington Post and a senior fellow of the Agora Institute at Johns Hopkins University.

Cullen Murphy is the editor at large of The Atlantic and a former managing editor of the magazine. He has also been the editor at large of Vanity Fair. His books include The Word According to Eve: Women and the Bible in Ancient Times and Our Own; Are We Rome?: The Fall of an Empire and the Fate of America; God’s Jury: The Inquisition and the Making of the Modern World; and Cartoon County: My Father and His Friends in the Golden Age of Make-Believe.