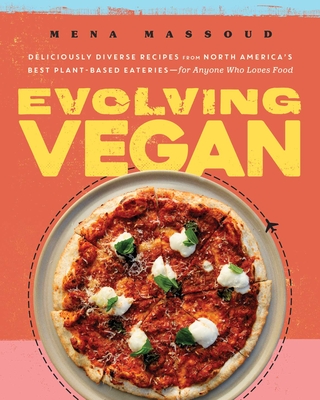 From actor and avid traveler Mena Massoud comes a collection of diverse, delicious, and accessible vegan recipes inspired from dishes all over the world, perfect for the aspiring vegan!

It’s safe to say that veganism is no longer just a trend. Lifelong vegans, part-time vegans, and the vegan curious are a diverse and eclectic group of people from all walks of life and backgrounds, and yet, there’s very little out there in mainstream media that reflects this new reality.

The Evolving Vegan cookbook celebrates both flavors and stories from a wide array of plant-based eateries all across North America, proving that a plant-friendly diet is truly accessible to all! Some of the recipes you will learn to make include:
-Sausage Shakshuka in a Skillet from the restaurant Chickpea in Vancouver
-Young Coconut Ceviche from the restaurant Rosalinda in Toronto
-BBQ Pulled “Pork” Jackfruit Sandwiches from the Butcher’s Son in Oakland, CA
-Indian Tofu Curry from The Sudra in Portland, OR
-Boston Cream Pie-Cake from Veggie Galaxy in Cambridge, MA
-Plus authentic Egyptian dishes from Mena’s mother, and many from Mena’s own SoCal home kitchen

Come travel with Mena to meet Cyrus Ichiza from Ichiza Kitchen in Portland, whose Taiwanese mother inspired him to share his Southeast Asian roots through authentically flavorful vegan dishes. Get a behind-the-scenes peek at the secrets of San Francisco’s Peña Pachamama, a Bolivian plant-based restaurant that serves national dishes like pique macho and aji de fideo.

Containing recipes from many different countries and cultures, and including helpful tips for lifelong vegans or flexitarians looking to expand their repertoire of vegan dishes, Evolving Vegan takes you on a food-based road trip to explore the vibrancy of veganism across North America.

Mena Massoud was born in Cairo, Egypt. At the age of three he immigrated to Toronto, Canada, with his parents and two sisters. He is the founder of his company Evolving Vegan, which aims at making veganism accessible to all. Mena has also launched his nonprofit, the EDA Foundation (the Ethnically Diverse Artists Foundation), and his production company, Press Play Productions, which is currently in development on several projects, including Evolving Vegan the series, which will document Mena’s travels as he searches for the best vegan establishments around the globe.

"From actor Mena Massoud comes a brand new way of looking at and cooking vegan fare. After his big break in Disney’s live-action Aladdin, Massoud turned his love of food into an exciting road trip to uncover the most diverse, accessible, and ground-breaking recipes from the top plant-based restaurants across North America. In 2018, when he founded his company Evolving Vegan, which aims to introduce people to plant-based living and help them evolve toward that lifestyle at their own pace, Massoud’s end goal was to create a book that documented his travels, discoveries, and way of life.

The result is EVOLVING VEGAN, part-cookbook/part-travel guide, that will take fellow food lovers and environmentalists on his journey, inspire them to cook more plant-based meals at home, and transform their views on what it means to eat “vegan.”

Breaking the tired mold of leafy greens and nut milk, the book marries as-real-as-it-gets authenticity with a zero-judgement attitude. Featuring 80 global recipes and helpful tips for lifelong and transitioning vegans alike, EVOLVING VEGAN is sure to become the cookbook that everyone will be talking about and cooking from. In addition to serving up some of his personal favorites like Fresh Chickpea Salad, Raw Sweet Potato Lasagna, and Tofu Pad Thai, Massoud also shares recipes he has collected from the rock star chefs he met on his epic trip. From breakfast to dinner, snack time to dessert, taste buds will be tempted with such dishes as Ethiopian Dinner from Brooklyn’s Bunna Café, Cast Iron Mac + Cheese from Donna Jean in San Diego, Jackfruit Flautas inspired by No Bones Beach Club in Seattle, Orange Cauliflower Bites from Red Lentil in Boston, Peruvian Potatoes from DC’s Fancy Radish, No-Bake Maple Pecan Pie from Toronto’s Sweet Heart Kitchen, and an Ice Cream Cookie Sandwich from FOMU Ice Cream Bar in Boston.

Plant-based cuisine has changed drastically over the past decade. Let Mena Massoud show you the future of veganism filled with innovative, inviting, and delicious food that everyone can enjoy! The book is available now for pre-order at evolvingvegan.com." —VegOut, May 7, 2020

“You already recognize Mena Massoud as the actor who brought Disney’s titular character from Aladdin to life on the big screen. But did you know he’s also written a book that explores vegan food across the country? Evolving Vegan is … filled with drool-worthy recipes and personal reflections from his travels across North America.”—Whitney Jefferson, Buzzfeed

“In addition to gorgeous photos and delicious recipes inspired by these incredible people he met on his travels, Evolving Vegan also celebrates the incredible cities he visited, the different cultures he encountered, and Mena’s personal journey towards plant-based living with heartfelt stories, advice, and some of the actor’s favorite recipes.”—VEGWORLD Magazine

"Mena Massoud, who stole our hearts last year in Disney's Aladdin, knows a thing or two about eating vegan on the go. With his latest endeavor, a cookbook/travel guide hybrid that hits shelves in September, the actor melds his personal journey toward meat-free living with heart-felt stories, advice, and recipes from some of the continent's best restaurants. Evolving Vegan: Deliciously Diverse Recipes from North America's Best Plant-Based Eateries—for Anyone Who Loves Food serves up delectables, such as Spicy Dan Dan Noodles and Boston Cream Pie-Cake, that are easy to re-create at home" —Megan Johnson, Yoga Journal

“Actor Mena Massoud’s new cookbook Evolving Vegan is a good place to begin to build a plant-based diet. The book is a bright, engaging and unstuffy journey toward veganism through recipes collected on a North American restaurant road trip. . . . The recipes are wide ranging and draw on many cultures including Egyptian, Ethiopian, Taiwanese, Indian and Chinese fare. . . . Joining the easy-to-make list are home favourites from Massoud and his mother.”—Vancouver Sun

“22 Gift-Worthy Cookbooks For Everyone On Your List (Or, You Know, Just For You). Why buy: In his first cookbook, actor Mena Massoud takes you through his journey into veganism, his mother's Egyptian kitchen, and his extensive travels across the North America in search of diverse (and ever-evolving) plant-based eats.”—Buzzfeed