Bonded by Battle: The Powerful Friendships of Military Dogs and Soldiers from the Civil War to Operation Iraqi Freedom (Paperback) 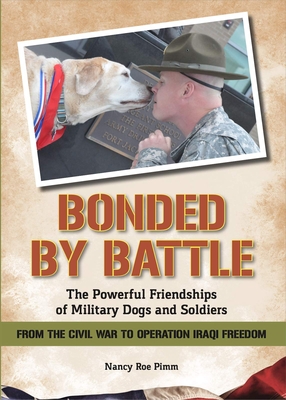 "A sure bet wherever military and canine titles are popular." -- School Library Journal

"Expertly captures the bonding relationship developed between human and animal under the tension of combat, where the difference between life and death is many times determined by a dog." -- John Burnam, creator of the U.S. Military Working Dog Teams National Monument

Dogs have faithfully followed humans into combat since the dawn of time. At first they simply provided emotional support. As soldiers found ways to use the canine's remarkable senses of smell and hearing, their bond deepened. The military working dog team was born.

Today dog teams are active across all branches of the military. Some perform tasks that are so specialized that, as author Nancy Roe Pimm discovered firsthand, the dogs are considered state secrets and can't be photographed.
Pimm tells the story of this evolving relationship between dogs and soldiers from the Civil War onward. Whether detecting mustard gas in World War I or improvised explosive devices in Iraq, the U.S. canine corps have adapted to modern warfare at every turn, with a reliability rating that technology has yet to match.
The dog's unmatched sense of smell and hearing proved invaluable in the jungle warfare of Vietnam, detecting booby traps and enemy movements and saving an estimated 10,000 American lives. Stories of their epic bravery circulated widely, like that of Nemo, who lay atop his wounded handler during a fierce firefight, never flinching even with one eye shot out.
However, as late as the 21st century, while a new generation of highly trained IED-detecting dogs was taking to the streets of Fallujah, official policy continued to treat them as little more than expendable equipment. The soldiers whose hearts had been touched -- and whose lives had been saved -- stepped up and fought several hard-won battles for the rights of their canine companions.
Pimm, a distinguished author of nonfiction for young readers, relates this evolving relationship between dogs and soldiers with heart and humor. The book carries the story up to the present day, including the 2016 legislation that would grant these dogs the same privileges and military honors bestowed on their handlers.