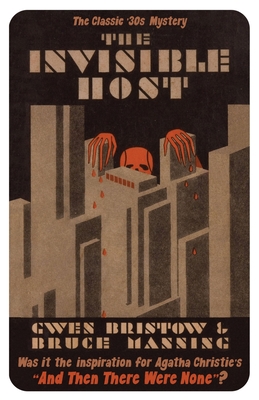 "Do not doubt me, my friends; you shall all be dead before morning."

New Orleans, 1930. Eight guests are invited to a party at a luxurious penthouse apartment, yet on arrival it turns out that no one knows who their mysterious host actually is. The latter does not openly appear, but instead communicates with the guests by radio broadcast. What he has to tell his guests is chilling: that every hour, one of them will die. Despite putting the guests on their guard, the Host's prophecy starts to come horribly true, each demise occurring in bizarre fashion. As the dwindling band of survivors grows increasingly tense, their confessions to each other might explain why they have been chosen for this macabre evening-and invoke the nightmarish thought that the mysterious Host is one of them. The burning question becomes: will any of the party survive, including the Host . . . ?

The Invisible Host (1930) established one of the best-loved and most durable forms in classic mystery fiction. It was famously to reappear in Agatha Christie's And Then There Were None (1939). How much Christie's novel is indebted to its predecessor is open to conjecture (and the subject is discussed in our new introduction, by crime fiction historian Curtis Evans). Whatever the verdict, readers will delight in The Invisible Host, an innovative and most unusual mystery from the golden age of crime fiction. It was adapted into a play, and a Hollywood movie as The Ninth Guest (1934).