Keeper of the Light: Saint Macrina the Elder, Grandmother of Saints (Paperback) 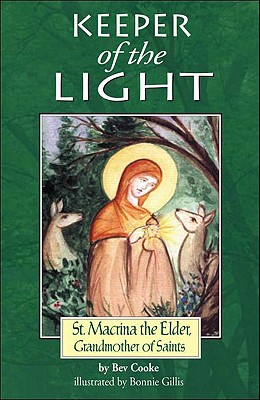 Readers of all ages will be fascinated by the story of St. Macrina the Elder, who had a profound influence on her grandchildren-St. Basil the Great, St. Gregory of Nyssa, and St. Macrina the Younger. She is truly a great confessor of the Orthodox Christian faith.The road to sainthood takes a lifetime to travel. . . . In the fourth century, Christians are labeled enemies of the Roman Empire-hounded, arrested, tortured, and executed. Macrina and her husband Basil, once-wealthy Christians, flee with their small son to the mountainous forests south of the Black Sea. There, Macrina embarks on a seven-year journey of unexpected tests and trials that will take her through a harsh and hungry wilderness pilgrimage, only to plunge her into poverty and danger on the streets of Neocaesarea. So begins Macrina's adventure in faith, as she undertakes the process of becoming one of the most influential women in sacred history, the mother and grandmother of saints.

A chapter book for young adults.