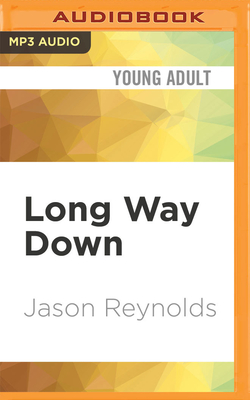 Will's brother Shawn was just murdered outside their apartment complex. He spends that night stunned with grief and wakes early the next day to find and kill the person who shot Shawn. As Will rides the elevator down to the lobby, the car stops on each floor and a ghost gets on. First, his surrogate brother; next, his best friend from childhood. An uncle. His father. And finally, Shawn. Each ghost tells a story and wonders why Will is seeking vengeance. Told in spare prose poetry, this stunning novel describes the unflinching violence that still inhabits parts of our cities and forces recognition of the unbearable grief these communities must bear. An important conversation starter for all to read, from grades 7 to adult.

“A novel in verse that spans the length of time it takes for an elevator to descend, Long Way Down finds Will mourning the death of his brother and grappling with the burden of avenging his murder. Will’s grief permeates every page, from his recollections of everyday childhood memories to his encounters with other figures from his past whose lives were destroyed by gun violence. Jason Reynolds says more with a stanza than most authors can say with a chapter.”
— Lelia Nebeker, One More Page Books, Arlington, VA

Shortlisted for the CILIP Carnegie Medal 2019

And then there were shots....

Everybody ran, ducked, hid, tucked themselves tight. Pressed our lips to the pavement and prayed the boom, followed by the buzz of a bullet, didn't meet us.

After Will's brother is shot in a gang crime, he knows the next steps. Don't cry. Don't snitch. Get revenge. So he gets in the lift with Shawn's gun, determined to follow The Rules. Only when the lift door opens, Buck walks in, Will's friend who died years ago. And Dani, who was shot years before that.

As more people from his past arrive, Will has to ask himself if he really knows what he's doing. This haunting, lyrical, powerful verse novel will blow you away.