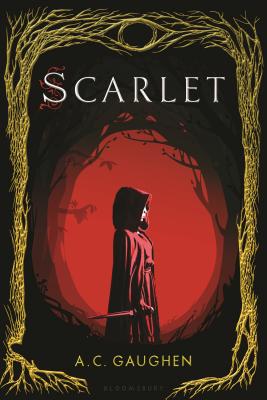 By A. C. Gaughen
Email or call for price.
Out of Print

Will Scarlet is good at two things: stealing from the rich and keeping secrets--skills that are in high demand in Robin Hood's band of thieves, who protect the people of Nottingham from the evil sheriff. Scarlet's biggest secret of all is one only Robin and his men know . . . that the boy terrorizing the sheriff's men is really a girl.

Scarlet's identity is in danger of being exposed when Lord Gisbourne arrives in town to rid Nottingham of the Hood and his men once and for all. As Gisbourne closes in, Scarlet must decide how much the people of Nottingham mean to her, especially Robin, whose quick smiles have the rare power to unsettle her. There is real honor among these thieves and so much more--making this a fight worth dying for.

A. C. Gaughen is a freelance writer and regular blogger who has had several stories published in the Chicken Soup for the Soul series. She attended college in Scotland but now lives in Massachusetts, USA.

"Debut novelist Gaughen does more than offer a rip-roaring tale, though it is that. The story, told in Scar's distinctive first-person voice, captivates and gets readers as deeply into the heart of a troubled girl. . . has plenty for both the romantic and the adventure lover." - starred review, Booklist

"Plenty of swashbuckling adventure and a hearty dose of romance power this re-imagining of the legend of Robin Hood." - Publishers Weekly

"There’s plenty of action here, as well as romance, and it appears that there’s even more to come." - Booklist on LADY THIEF

"Filled with action, suspense, and a healthy dash of passionate but controlled romance." - School Library Journal on LADY THIEF

"Scarlet is a worthy protagonist for adolescent female readers, and [the] nonstop action that peppers the plot will entice male teens with a penchant for semihistorical fiction." - VOYA on LION HEART