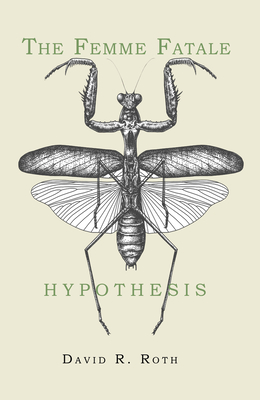 More accurately a love triptych than triangle, The Femme Fatale Hypothesis is the story of one spring in 2015 when three people form intimate bonds forged in the fires of their respective tribulations. As Rose Geddes’s lung cancer progresses toward its inexorable end and her husband’s ability to care for her diminishes, their widowed neighbor, June Danhill, stumbles into the middle of their intersecting crises. June’s only son, daughter-in-law, and two grandchildren have recently moved to the West Coast. She embraces the opportunity to distract herself from her loneliness by helping to care for the Geddeses. But it isn’t long before June realizes that Rose wants more from her than she is willing to give. Love and loss, family secrets, visiting vultures, the Memorial Park boys, a long-forgotten keepsake, morphine versus fentanyl, and the sexual cannibalism of the false garden mantid all fuel this psychological thriller that tests the thin line between mercy and murder.

David R. Roth's short stories have appeared in Passager Journal, Moss, Every Writer... Of one awarding winning story, contest judge Janet Benton (Lilli De Jong) noted "the precision of the observations throughout” and called it "elegantly written with a touch of humor." His work focuses on fictional lives lived in fictional river towns in Bucks County, Pennsylvania, his real home for four decades. The Femme Fatale Hypothesis is his debut novel.

"A luminously written and impeccably well-crafted novel that explores the deepest human mysteries: love and death. [...]The Femme Fatale Hypothesis has a profound resonance in this time when we are all contemplating life's ultimate questions." —Jake Lamar, author of Bourgeois Blues and Rendezvous Eighteenth

"Roth's radiant debut novel explores love and loss in this thoughtful meditation on what it means to be alive—and to die." —Alison Wellford, author of Indolence

"David Roth brings a scientist's sensibility and toolbox to his storytelling, and his are rare instruments. He has a preternatural ability to trap moments in characters' lives and preserve them in words that amplify and crystalize human emotion. There are so many sentences in this book to be dissected, admired and marveled at. The sum total is a story that feels both self-evident and astonishing. " —Nomi Eve, author of Henna House and the Family Orchard, a Book-of-the-month Club Main Selection

"A perfect story beautifully written. The thoughtful interplay between husband, wife, and neighbor hides secret inner worlds. The tension between what people say and what they keep private builds into a heartbreaking and wonderful drama. David Roth reminds us the minutia of everyday life is never inconsequential." —Terese Brasen, author of Kama

"David Roth delivers a crushing love story involving two captivating characters, a science professor and a psychologist, married nearly fifty years, grappling with an ambiguous line between euthanasia and murder. A widow neighbor forms a dramatic triangle with her caretaking, empathy, and sexual tension. Roth is masterful at weaving science, philosophy, and literature throughout to raise life’s essential questions in this thoroughly gripping novel." —Jeffrey Greene, author of French Spirits

David Roth’s The Femme Fatale Hypothesis is a moving contemplation of the storms and passions of aging, often overlooked by a culture that worships youth. [...] The Femme Fatale Hypothesis is an honest, sometimes confronting, story of loss and change — of people, of towns, of the natural world. And though Rose, a lover of poetry, doesn’t pick up Dylan Thomas in the course of the novel, readers will sense the force, and heroism, of her 'rage against the dying of the light." —Rebecca Baum, author of Lifelike Creatures

"The Femme Fatale Hypothesis is involving and thought-provoking—a poignant and truthful meditation on dying, love, and grief." —Ian Lewis, author of The Ballad of Billy Bean

"If you love reading, and especially if you’ve been yearning to remember why you love reading, don’t miss The Femme Fatale Hypothesis. Here we’re given, finally, a contemporary debut novel free of sanctimony, bravely alive with humanizing complexity, aswirl with genuine feeling rather than sentimentalism, indelible in its themes and images, and generously engrossing in its plot. It’s all here. Your readerly mind and heart will overflow with gratitude to David R. Roth." —M. Allen Cunningham, author of Q & A, Perpetua's Kin, and The Green Age of Asher Witherow


"In his elegantly crafted and touching debut novel, David R. Roth uses three points of view to walk us through the lives of a long-married couple facing death and their younger neighbor, who is drawn into their heavily weighted world as a bug is drawn into a spider’s web. Roth effectively plumbs both the intimacy of a long marriage and its sinister potential, moving us gently toward his startling conclusion." —Janet Benton, Author of Lilli De Jong