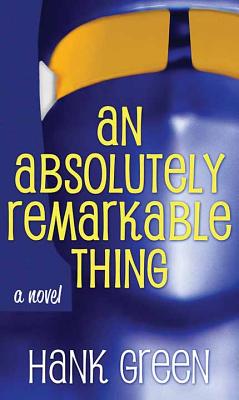 An Absolutely Remarkable Thing follows the protagonist April May through her journey of unexpected fame after she accidentally makes first contact with the alien “Carl” statues placed in every major city on earth. Suddenly the leader of a movement for peace and world cooperation in solving the mystery of the Carls. April’s narration will immediately pull you into her life story as it incorporates the current pop culture of internet fame and reads like an actual autobiography.

“This book is so much fun. When April May stumbles across the first ‘Carl,’ she initially thinks it’s an art installation. It turns out these giant statues turned up overnight in major cities around the globe. Due to the viral video she made with her friend Andy, April May finds herself in the middle of a worldwide conversation and trying to manage her newfound celebrity status. Green is an excellent storyteller and has delivered a great coming-of-age/sci-fi debut novel.”
— Jennifer Hill, Powell's Books, Portland, OR