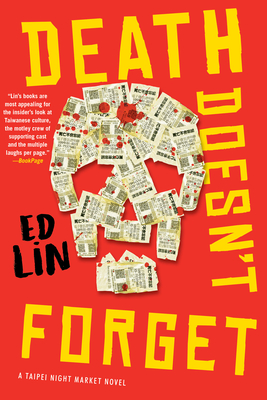 This is book number 4 in the A Taipei Night Market Novel series.

Jing-nan, owner of a popular night market food stall, is framed for a string of high-profile murders—why does it seem like he's always the one left holding the skewer? The fourth entry to Ed Lin's Taipei mystery series is as hilarious and poignant as ever.

Taipei is rocked by the back-to-back murders of a recent lottery winner and a police captain just as the city is preparing to host the big Austronesian Cultural Festival, which has brought in indigenous performers from all around the Pacific Rim to the island nation of Taiwan. Jing-nan, the proprietor of Unknown Pleasures, a popular food stand at Taipei’s largest night market, is thrown into the intrigue. Is he being set up to take the rap, or will he be the next victim? The fallout could jeopardize Jing-nan’s relationship with his girlfriend, Nancy, who is herself soon caught up in the drama, and is increasingly annoyed at Jing-nan’s failure to propose to her.

Jing-nan also has to be careful not to alienate his trusty workers Dwayne and Frankie the Cat, who are facing their own personal trials. Dwayne struggles to reconnect with his roots as a person of aboriginal descent, while septuagenarian Frankie helps a fellow veteran with dementia, intertwining stories that illuminate decades of Taiwanese history.

Jing-nan, meanwhile, has to untangle the mystery of the killings while keeping his food stall afloat against hip new competition. Both his life, and his Instagram follower count, hang in the balance.

Ed Lin is a journalist by training and an all-around stand-up kinda guy. He’s the author of the Taipei Night Market series: Ghost Month, Incensed, and 99 Ways to Die; his literary debut, Waylaid; and the Robert Chow crime series set in 1970s Manhattan Chinatown: This Is a Bust, Snakes Can’t Run, and One Red Bastard. Lin, who is of Taiwanese and Chinese descent, is the first author to win three Asian American Literary Awards. Lin lives in New York with his wife, actress Cindy Cheung, and son.

“[An] inventively humanistic work, one with welcome instances of love, religious questioning (through a variety of faiths) and one terrifically effective episode of magical surrealism.”
—Tom Nolan, The Wall Street Journal

“There is a marvelously mordant quality to Ed Lin’s novels, which combine depictions of the darkest criminality with a sense of the absurd.”
—Sarah Weinman, The New York Times Book Review

“A master of Taipei noir [Ed Lin] proves every good crime novel is a social novel . . . What differentiates Death Doesn’t Forget is its sense not of despair but of equanimity. The future is unwritten, in other words; it must be lived to be revealed.”
—David L. Ulin, Los Angeles Times

“Instead of a picture postcard view that tourists might get of museums, memorial halls and tea houses of Taipei, Author Lin offers us a slice of the gritty street life there. As a bonus, he makes us aware of the social and political challenges faced by this island nation.”
—International Examiner

“Ed Lin weaves a funny and biting picture of Taiwan’s political and social fabric, commenting on its disenfranchised — and most importantly, its food . . . Simply impressive.”
—Taipei Times

“For fans of amateur sleuths who want to armchair travel while armchair sleuthing.”
—Book Riot

“We’re treated to Lin’s always wonderful array of characters, bits of Taiwanese history, and explanations of the current political scene—all without feeling like we’re in school. Lin is definitely a satirist, but this novel is deeply poignant at the same time.”
—First Clue

“Lin's signature rollicking mixture of wink-wink noir and impossible fortuity is again on full display, balancing just enough chill with plenty of thrill. Murder is never funny, but at least a chuckle here and a guffaw there can't hurt the corpses.”
—Shelf Awareness

“Jing-Nan, the coolest crime solver around, is back slinging food and solving crimes.”
—CrimeReads

“Death Doesn’t Forget is a mystery novel that balances growth and intrigue with an exploration of a busy city that sees everything.”
—Foreword Reviews

“This mystery has the same big pluses and small minus as the earlier ones by Ed Lin: The plot is lively, the characters unusual and well motivated, and the scenes are intriguing and unusual . . . For any shelf of Taiwan or international crime fiction, Ed Lin's books are a must. They hold up to re-reading, too.”
—Kingdom Books

“Death Doesn’t Forget may be your first Ed Lin novel, but it surely won’t be your last. Lin is a master of conveying a lot of fascinating information via a toe-tapping plot and characters who are realistic, flawed, pragmatic and deeply immersed in a society and culture that’s engagingly foreign to US readers.”
—The Agony Column

“What lingers in the memory, as always in the Taipei Night Market novels, is the flavorsome portrait of the city, this time with particular and highly effective attention to its Aboriginal Australian population.”
—Kirkus Reviews

“If you’re looking for a book that will both transport you to the streets of Taipei and have you laughing out loud, Ed Lin’s Taipei Night Market series is unmissable.”
—Amazon Book Review

“A stylish, smart thriller for the mind, heart, and gut. Sex, music, history, politics, food, humor, and just a touch of violence and death—you get it all. And when you're done, you’ll beg for more.”
—Viet Thanh Nguyen, Pulitzer Prize–winning author of The Sympathizer

“A unique blend of tension, charm, tragedy and optimism, with characters you’ll love, and a setting so real you’ll think you’ve been there.”
—Lee Child

“A sidewalk noodle shop in Taipei’s Shilin Night Market during summer’s Ghost Month is the vivid backdrop . . . The plot twists come fast and furious as the story reaches its climax. Come for the exotic food and fascinating setting; stay for the characters.”
—The Boston Globe

“Covers Taiwan’s complicated political identity and relationship with mainland China, all during one of the most remarkable times of the year: Ghost Month.”
—To the Best of Our Knowledge

“Pure and perfect suspense and a book that is almost impossible to put down.”
—Crimespree Magazine