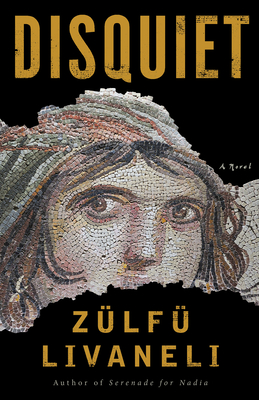 From the internationally bestselling author of Serenade for Nadia, a powerful story of love and faith amidst the atrocities committed by ISIS against the Yazidi people.

Disquiet transports the reader to the contemporary Middle East through the stories of Meleknaz, a Yazidi Syrian refugee, and Hussein, a young man from the Turkish city of Mardin near the Syrian border. Passionate about helping others, Hussein begins visiting a refugee camp to tend to the thousands of poor and sick streaming into Turkey, fleeing ISIS. There, he falls in love with Meleknaz—whom his disapproving family will call “the devil” who seduced him—and their relationship sets further tragedy in motion.

A nuanced meditation on the nature of being human and an empathetic, probing look at the past and present of these Mesopotamian lands, Disquiet gives voice to the peoples, faiths, histories, and stories that have swept through this region over centuries.

Zülfü Livaneli is Turkey’s bestselling author, a celebrated composer and film director, and a political activist. Widely considered one of the most important Turkish cultural figures of our time, he is known for his novels that interweave diverse social and historical backgrounds, figures, and incidents, including the critically acclaimed Bliss (winner of the Barnes & Noble Discover Great New Writers Award), Serenade for Nadia (Other Press, 2020), Leyla’s House, and My Brother’s Story, which have been translated into thirty-seven languages, won numerous international literary prizes, and been turned into movies, stage plays, and operas.

Brendan Freely was born in Princeton in 1959 and studied psychology at Yale University. His translations include Two Girls by Perihan Mağden, The Gaze by Elif Şafak, and Like a Sword Wound by Ahmet Altan.

“[An] arresting novel.” —The New Yorker

“A tale of identities colliding from a writer who’s held five passports…[Disquiet] unfolds in a border town caught between its ancient past and tumultuous present.” —NPR, All Things Considered

“A keenly wrought story…[whose] urgency comes through in its tight grasp on the problems of religious violence, misogyny, and the failures of compassion. The result is a memorable illumination of the Ezidi people’s rich history.” —Publishers Weekly

“In this soulful novel, Zülfü Livaneli presents a touching human story that unfolds alongside the real-life horrors of terrorist war. Set in and around the ancient crossroads city of Mardin—one of my favorite places in the world—it is both timeless and urgently contemporary. Disquiet is as rich in character and imagery as it is potent in moral clarity.” —Stephen Kinzer, author of Crescent and Star: Turkey Between Two Worlds

“This is a riveting story skillfully rendered. It is a gift to readers.” —Rafia Zakaria, author of Against White Feminism

“A journalist investigates his friend’s murder and learns the truth about the brutality of war, religious intolerance, cultural chauvinism, hate, sacrifice, and love. Livaneli is a brilliant Turkish writer with a voice and a message that must be heard globally.” —Mahbod Seraji, author of Rooftops of Tehran

“On the surface, Disquiet is a quest narrative that follows a man searching for answers about a friend’s horrific death, but beneath that framework pulse probing questions about the mortal cost of prejudice, the chasm between East and West, the mystery of obsession, and the necessity of recognizing our shared humanity. It is a slim dagger of a book that cuts deep.” —Keija Parssinen, author of The Ruins of Us

“Heartbreakingly vivid...Livaneli’s passion in exposing Turkey’s and the West’s culpability in real massacres is eloquent...hard to forget.” —Kirkus Reviews