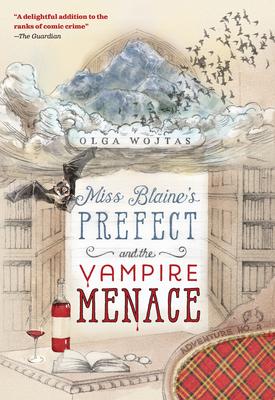 Never underestimate a librarian. Readers learned that lesson with the Prefect's first adventure (Miss Blaine's Prefect and the Golden Samovar: "marvelous" and "a laugh-out-loud farce" Publishers Weekly, starred review]). Now a certain Count from Transylvania is about to learn it as well, when the intrepid Shona McMonagle (comfortably padded, in her middle years, and a whiz at obscure martial arts) time-travels to 19th-century France to help a village being menaced by a mysterious killer. It's true that Dracula's name has for more than a hundred years been a byword for terror, but nothing can stop an agent trained by the Marcia Blaine School for Girls.

Olga Wojtas was born and raised in Edinburgh, but canny readers will have spotted her lack of a traditional Scottish name. Her father was a Polish soldier who settled in the UK after the Second World War, and her mother was a teacher assigned to teach the soldiers English. She attended James Gillespie's High School (immortalized in The Prime of Miss Jean Brodie), where she fell in love with Russian literature; the first Miss Blaine novel was inspired in roughly equal parts by Muriel Spark and Leo Tolstoy. After graduating from the University of Aberdeen, Olga became a journalist, eventually working in England, France, and Washington, DC, as well as in Scotland. She has had more than thirty short stories published in literary magazines and anthologies, and the Miss Blaine books are her first novel-length works. She lives in Edinburgh with her husband, Alistair. If you are lucky enough to meet her, ask her to tell you about Wojtek the bear.