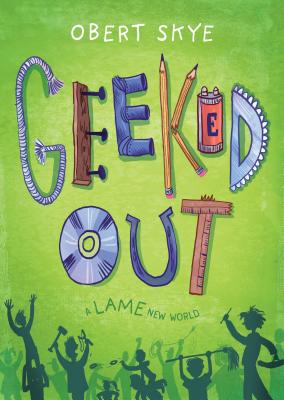 This is book number 1 in the Geeked Out series.

In a post-apocalyptic world, the AV (audio visual) club has become the Anti Violence Club. Tip and his three friends try to survive and stay out of the way of the Jocks and the principal's evil secretary, Darth Susan. When the four are bitten by oozing spiders, they develop superpowers that help them take over the school for the better. Told with Obert Skye's signature humor, GEEKED OUT is the beginning of a very fun new series for grades 3 and up.

Waddle Jr. High has become a dystopian outpost with divided cliques—Pepville, Jockstown, Staffland, and even Geekdom. Society may be in danger but middle school must go on. Enter geeky Tip and all his friends: easy-to-blush Owen, coding master Xennipher, and brilliant, dependable Mindy, who've all had enough of being bullied and decide to take a stand. Together, they form a secret vigilante group: the League of Average Mediocre Entities, better known as LAME. With everything that’s going on in the world, their school could use a few heroes. And what if those heroes were geeked-up superheroes? Get ready. Better yet, get LAME!

This irrepressible spoof series is full of the same clever humor and hilarious cartoon illustrations as the Creature From My Closet series, but for a slightly older middle-grade audience.

This has Common Core connections.

"Dystopia meets “Wimpy Kid” in this mash-up. . . Hand Skye’s latest to the crowd that appreciates Janet Tashjian’s “MyLife As A…” series, or any kid who craves comic-style illustrations and slapstick, laugh-out-loud humor."--School Library Journal