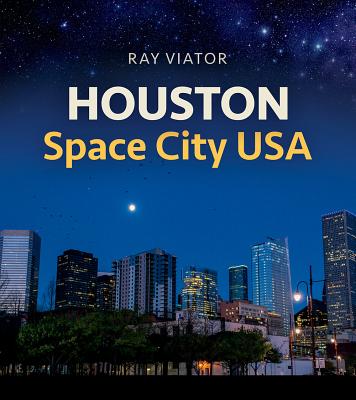 On July 20, 1969, humanity paused with attention locked to television and radio broadcasts as the astronauts of the Apollo 11 mission dramatically touched down on the dusty face of the moon. The first word from the lunar surface: Houston.

Houston, Space City USA is a visual celebration of the city’s historic ties to the US human space program. When President Kennedy declared, “We choose to go to the moon in this decade and do the other things, not because they are easy, but because they are hard,” he did so from the campus of Rice University. More than half a century later, Houston continues to serve as the nerve center of the American human space program.

Author and photographer Ray Viator, a longtime Houstonian, has lovingly captured the spirit of a city’s devotion to space exploration from then to now. Using striking photographs of the full moon as a visual motif of Houston’s connection to spaceflight, Viator also weaves together historic images to show how former cow pastures transformed into mission control. Some connections are obvious—the Houston Astros or the Houston Rockets. Others are hidden in plain sight, like the arm patches on the uniform of every Houston police officer that read, “Space City U.S.A.” Viator’s lens captures this and more.

Houston, Space City USA not only marks the important milestone of the first lunar landing, but it also helps readers discover and rediscover a city’s constellation of connections to one of humankind’s greatest achievements.

The author's proceeds from the sale of this book will benefit Houston Public Media.

RAY VIATOR, now retired after more than forty years as a journalist, editor, photographer, and communications executive, is the author of Houston: People, Opportunity, Success. His work has appeared in such publications as the Houston Chronicle, Technology Houston, International Houston, and Medical Houston. He resides in Houston.