How to Lead a Life of Crime (Hardcover) 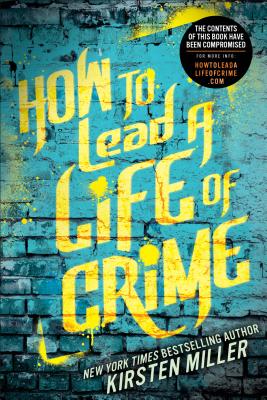 By Kirsten Miller
Email or call for price.
Hard to Find

Ever since he ran away from military school, Flick has survived in New York by picking pockets and hopes to one day avenge the death of his beloved brother at the hands of his father. He’s offered a scholarship to the exclusive Mandel Academy, a private school that trains students in everything from murder to extortion. It’s Hogwarts gone very, very bad, and this story grows more and more compelling, as fellow students begin to die during training. Flick rises through the ranks of students, scheming against the schemers. Will he make it? You won’t be able to put it down as you race to find out! For grades 9 and up.

A Meth Dealer.A Prostitute.A Serial Killer.
Anywhere else, they d be vermin. At the Mandel Academy, they re called
prodigies. The most exclusive school in New York City has been training young
criminals for over a century. Only the most ruthless students are allowed to
graduate. The rest disappear.
Flick, a teenage pickpocket, has risen to the top of his class. But then Mandel
recruits a fierce new competitor who also happens to be Flick's old flame.
They ve been told only one of them will make it out of the Mandel Academy. Will
they find a way to save each other or will the school destroy them both?

Kirsten Miller is the author of the "New York Times" bestselling "The Eternal Ones," as well as "All You Desire" and the acclaimed Kiki Strike books. She lives inBrooklyn, where it s always wise to think like a criminal. Find out more at www.kirstenmillerbooks.blogspot.com."

"This will grab teen readers just as Miller's Kiki Strike books grabbed middle-grade students. A thick, satisfying read that ought to keep readers up late." -Booklist

"Miller keeps every character grounded and believable, giving the story's horrors substantial impact. The resulting book often belies its cute title, in ways that will have readers racing to the end." -PW

"Miller has created a fantastic devil's snare, wherein the typical plotline of teens taking on a corrupt regime is given a new and exhilarating spin." -VOYA (starred review)