The Interestings: A Novel (Paperback) 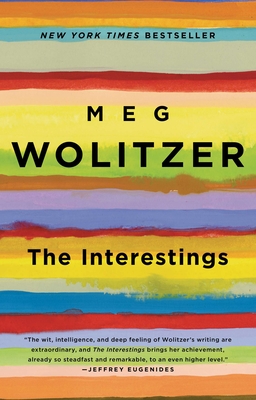 The summer after her father dies, Julie Jacobsen goes to the creative Spirit-of-the-Woods camp on a scholarship. There she meets a group of five others, most of whom will be her friends for life They call themselves the Interestings, a name that's a bit narcissistic, but then aren't teenagers a little self-absorbed? Julie becomes "Jules", and she and the beautiful, rich, and serious Ash are best friends. When Jules rejects the advances of gifted but physically unappealing Ethan Figman, he eventually turns to Ash. The novel takes the characters into middle age as they search for careers with meaning while they also try to make ends meet--except for Ethan anyway. He is rich, successful, and powerful but has his own issues to deal with. The drama surrounding Ash's brother Goodman and Cathy, another girl in camp, follows the Interestings for years to come. Taking the reader through several decades in New York and American history, Meg Wolitzer provides a story with well-drawn characters and is a realistic portrayal of life, love, and the pursuit of money.

"A victory . . . The Interestings secures Wolitzer's place among the best novelists of her generation. . . . She's every bit as literary as Franzen or Eugenides. But the very human moments in her work hit you harder than the big ideas. This isn't women's fiction. It's everyone's."—Entertainment Weekly (A)

The New York Times–bestselling novel by Meg Wolitzer that has been called "genius" (The Chicago Tribune), “wonderful” (Vanity Fair), "ambitious" (San Francisco Chronicle), and a “page-turner” (Cosmopolitan), which The New York Times Book Review says is "among the ranks of books like Jonathan Franzen’s Freedom and Jeffrey Eugenides The Marriage Plot."

The summer that Nixon resigns, six teenagers at a summer camp for the arts become inseparable. Decades later the bond remains powerful, but so much else has changed. In The Interestings, Wolitzer follows these characters from the height of youth through middle age, as their talents, fortunes, and degrees of satisfaction diverge.

The kind of creativity that is rewarded at age fifteen is not always enough to propel someone through life at age thirty; not everyone can sustain, in adulthood, what seemed so special in adolescence. Jules Jacobson, an aspiring comic actress, eventually resigns herself to a more practical occupation and lifestyle. Her friend Jonah, a gifted musician, stops playing the guitar and becomes an engineer. But Ethan and Ash, Jules’s now-married best friends, become shockingly successful—true to their initial artistic dreams, with the wealth and access that allow those dreams to keep expanding. The friendships endure and even prosper, but also underscore the differences in their fates, in what their talents have become and the shapes their lives have taken.

Wide in scope, ambitious, and populated by complex characters who come together and apart in a changing New York City, The Interestings explores the meaning of talent; the nature of envy; the roles of class, art, money, and power; and how all of it can shift and tilt precipitously over the course of a friendship and a life.

Meg Wolitzer is the New York Times bestselling author of The Interestings, The Uncoupling, The Ten-Year Nap, The Position, The Wife, and Sleepwalking. She is also the author of the young adult novel, Belzhar. Wolitzer lives in New York City.

“Remarkable . . . [The Interestings’s] inclusive vision and generous sweep place it among the ranks of books like Jonathan Franzen’s Freedom and Jeffrey Eugenides The Marriage Plot. The Interestings is warm, all-American, and acutely perceptive about the feelings and motivations of its characters, male and female, young and old, gay and straight; but it’s also stealthily, unassumingly, and undeniably a novel of ideas. . . . With this book [Wolitzer] has surpassed herself.”—The New York Times Book Review

"A victory . . . The Interestings secures Wolitzer's place among the best novelists of her generation. . . . She's every bit as literary as Franzen or Eugenides. But the very human moments in her work hit you harder than the big ideas. This isn't women's fiction. It's everyone's."—Entertainment Weekly (A)

"The big questions asked by The Interestings are about what happened to the world (when, Jules wonders, did 'analyst' stop denoting Freud and start referring to finance?) and what happened to all that budding teenage talent. Might every privileged schoolchild have a bright future in dance or theater or glass blowing? Ms. Wolitzer hasn’t got the answers, but she does have her characters mannerisms and attitudes down cold."—The New York Times

"I don't want to insult Meg Wolitzer by calling her sprawling, engrossing new novel, The Interestings, her most ambitious, because throughout her 30-year career of turning out well-observed, often very funny books at a steady pace, I have no doubt she has always been ambitious. . . . But "The Interestings" is exactly the kind of book that literary sorts who talk about ambitious works . . . are talking about. . . . Wolitzer is almost crushingly insightful; she doesn't just mine the contemporary mind, she seems to invade it."—San Francisco Chronicle

"A supremely engrossing, deeply knowing, genius-level enterprise . . . The novel is thick and thickly populated. And yet Wolitzer is brilliant at keeping the reader close by her side as she takes her story back and forth across time, in and out of multiple lives, and into the tangle of countless continuing, sometimes compromising, conversations."—Chicago Tribune

“Masterful, sweeping . . . Her clear gaze captures the intricacies of lasting friendship, enduring love, marital sacrifice, bitter squabbles, family secrets, parental angst and deep loss. Though the story hops back and forth in time, it is rarely confusing, frequently funny and always engaging. . . . A story that feels real and true and more than fulfills the promise of the title. It is interesting, yes, but also moving, compelling, fascinating, and rewarding.”—Miami Herald

“Wolitzer has produced a novel that is big by at least a couple of clear measures—it’s nearly 500 pages long, and it covers a lot of time and drama in the lives of a small circle of friends. . . . It’s a small world in which these characters want to live large, and Wolitzer is wonderful at conveying that through the point of view of someone who doesn’t even see it, all the while shading in the stuff that lives, big and small, are made of.”—Minneapolis Star Tribune

“It’s a ritual of childhood—that solemn vow never to lose touch, no matter what. And for six artsy teenagers whose lives unfold in Wolitzer’s big-hearted, ambitious new novel, the vow holds for almost four decades.”—People

"Readers may also enjoy comparing The Interestings with Claire Messud's The Emperor's Children . . . In probing the unpredictable relationship between early promise and success and the more dependable one between self-acceptance and happiness, Wolitzer's novel is not just a big book but a shrewd one."—Christian Science Monitor

"[The Interestings] soars, primarily because Wolitzer insists on taking our teenage selves seriously and, rather than coldly satirizing them, comes at them with warm humor and adult wisdom."—Elle

"In Meg Wolitzer's lovely, wise The Interestings, Julie Jacobson begins the summer of '74 as an outsider at arts camp until she is accepted into a clique of teenagers with whom she forms a lifelong bond. Through well-tuned drama and compassionate humor, Wolitzer chronicles the living organism that is friendship, and arcs it over the cours of more than thirty years."—O, the Oprah Magazine

"What becomes a legend most? or rather, who? Those with innate ability? Those blessed with enough beauty or money to indulge any creative whim? Or just those who want it the most? In The Interestings, Meg Wolitzer's quarry is ambition: what it means to have it, how to use it, how it's lost."—Time

"Best-selling novelist Meg Wolitzer specializes in witty, knowing takes on contemporary marriage, divorce, and relationships. Her ninth novel, The Interestings, is smart, nuanced, and fun to read, in part because of the effervescent evocation of New York City from Watergate to today, in part because of the idiosyncratic authenticity of her characters."—The Daily Beast

"You’ll want to be friends with these characters long after you put down the book.”—Marie Claire

“[A] big, juicy novel . . . Wolitzer’s finger is unerringly on the pulse of our social culture."—Readers Digest

"Meg Wolitzer kicks off her buzzy tenth novel in 1974 at a summer camp for artsy kids, where a tight-knit group of campers is plotting world domination. The result is a Franzen-like treatise on talent, fate, friendship, and the limits of all three."—V Magazine

“Breathtaking in its scope and a remarkably fun page-turner . . . “[Wolitzer's] social commentary on art, money and fame should have her compared to Tom Wolfe, but her work is much larger than that.”—Matchbook

"Like Virginia Woolf in The Waves, Meg Wolitzer gives us the full picture here, charting her characters' lives from the self-dramatizing of adolescence, through the resignation of middle age, to the attainment of a wisdom that holds all the intensities of life in a single, sustained chord, much like this book itself. The wit, intelligence, and deep feeling of Wolitzer's writing are extraordinary and The Interestings brings her achievement, already so steadfast and remarkable, to an even higher level."—Jeffrey Eugenides

"Wolitzer follows a group of friends from adolescence at an artsy summer camp in 1974 through adulthood and into late-middle age as their lives alternately intersect, diverge and reconnect. . . . Ambitious and involving, capturing the zeitgeist of the liberal intelligentsia of the era."—Kirkus (starred)