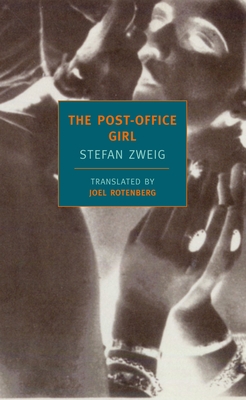 Wes Anderson on Stefan Zweig:  "I had never heard of Zweig...when I just more or less by chance bought a copy of Beware of Pity. I loved this first book.  I also read the The Post-Office Girl.  The Grand Budapest Hotel has elements that were sort of stolen from both these books. Two characters in our story are vaguely meant to represent Zweig himself — our “Author” character, played by Tom Wilkinson, and the theoretically fictionalised version of himself, played by Jude Law. But, in fact, M. Gustave, the main character who is played by Ralph Fiennes, is modelled significantly on Zweig as well."

The post-office girl is Christine, who looks after her ailing mother and toils in a provincial Austrian post office in the years just after the Great War. One afternoon, as she is dozing among the official forms and stamps, a telegraph arrives addressed to her. It is from her rich aunt, who lives in America and writes requesting that Christine join her and her husband in a Swiss Alpine resort. After a dizzying train ride, Christine finds herself at the top of the world, enjoying a life of privilege that she had never imagined.

But Christine’s aunt drops her as abruptly as she picked her up, and soon the young woman is back at the provincial post office, consumed with disappointment and bitterness. Then she meets Ferdinand, a wounded but eloquent war veteran who is able to give voice to the disaffection of his generation. Christine’s and Ferdinand’s lives spiral downward, before Ferdinand comes up with a plan which will be either their salvation or their doom.

Never before published in English, this extraordinary book is an unexpected and haunting foray into noir fiction by one of the masters of the psychological novel.

Stefan Zweig (1881—1942) spent his youth studying philosophy and the history of literature in Vienna and belonged to a pan-European cultural circle that included Hugo von Hofmannsthal and Richard Strauss. In 1934, under National Socialism, Zweig fled Austria for England, where he authored several novels, short stories, and biographies. In 1941 Zweig and his second wife traveled to Brazil, where they both committed suicide. NYRB Classics published his novels Chess Story and Beware of Pity.

“Is it possible to have a realist fairy story? If so, this is it. The characters are so well realised and observed, and there are passages of such imaginative immersion, that we owe its publisher our gratitude for bringing it into English for the first time. What a treat this book is”. --The Spectator (UK)

“An exhilarating ski run of poverty, joy and misery... it is the girl's ecstatic naivety and Zweig's sparkling prose that makes the old stories so sweetly fresh and, when the whole dream collapses, so devastatingly sad”. --The Sunday Times (UK)

"In The Post-Office Girl Stefan Zweig explores the details of everyday life in language that pierces both brain and heart...The story is poignant, painful, and must be one of fiction’s darkest indictments of how poverty destroys hope, enjoyment, beauty, brightness and laughter, and how money, no matter how falsely, provides ease and delight." --The Spectator (UK)

"This is a fascinating depiction of the effects of history on individual lives." --The Financial Times

"The Post Office Girl is a fine novel and an excellent place to start if you are new to this great Austrian novelist. It is a powerful social history, describing in moving detail the social impact of the First World War, and the extreme poverty in which so many people were forced to live. It shows up the challenge to European civilisation of the early Thirties and the failure of humanism, in which Zweig believed until the end of his life. And it is remarkable for the bleak interior worlds it depicts of anxiety, self-doubt, depression and disintegration. Zweig succeeded in taking the most complex concepts of psychoanalysis and bringing them vividly to life." --The Telegraph

"Stefan Zweig was a late and magnificent bloom from the hothouse of fin de siecle Vienna...The posthumous publication of a Zweig novel affords an opportunity to revisit this gifted writer...The Post-Office Girl is captivating." --The Wall Street Journal

"... nowhere else in his fiction does Zweig confront the legacy of the Great War with as deep a social reach or as detailed a human sympathy as he does in The Post-Office Girl... we are lucky to have the book, not only for its devastating picture of postwar Austrian life but also because it represents so radical a departure from Zweig's other fiction as to signal the existence of a hitherto unsuspected literary personality..." —William Deresiewicz, The Nation

"[In this] ... beautiful translation by Joel Rotenberg.... Stefan Zweig finds a universal story of psychological struggle and spiritual testing in a bitter but humane indictment of class inequality. He finds a love story, of a sort, in a quest story, and a quest story in a love story. He finds anger in compassion, and compassion in anger; beauty in suffering, and suffering in beauty." --The New York Observer

"[Zweig is a] writer who understands perfectly the life he is describing, and who has great analytic gifts . . . " –Stephen Spender, The New York Review of Books

"Always [Zweig] remains essentially the same, revealing in all . . . mediums his subtlety of style, his profound psychological knowledge and his inherent humaneness." –Barthold Fles, The New Republic

“The experience of reading Zweig is not so much of entering the world of the story as of plunging inward and dreaming the story.” –Rachel Cohen, Bookforum