After the Funeral: A Hercule Poirot Mystery (Hardcover) 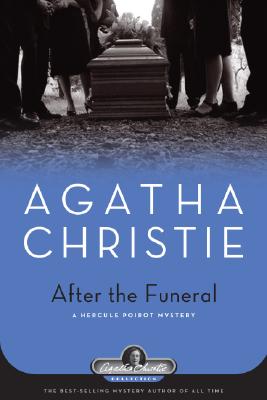 When Richard Abernethie, the master of Enderby Hall, dies his heirs assemble at the vast Victorian mansion to hear the reading of the will. It is then that Cora, Abernethie's sister, comes out with an alarming proposal: "But he was murdered, wasn't he?" The next day Cora is found brutally bludgeoned to death in her home.

None other than Belgian sleuth Hercule Poirot is summoned to Enderby in pursuit of the murderer. Suspects abound including a wayward nephew unlucky with women and horses, a favorite and seemingly blameless sister-in-law, two feuding nieces, a nosey housekeeper, and a disingenuous art collector.

Poirot must conjure all of his deductive powers in order to unmask the killer and his final conclusion is a brilliant and unexpected as ever. After the Funeral is classic Christie at her best.

Agatha Christie was born in 1890 and created the detective Hercule Poirot in her debut novel, The Mysterious Affair at Styles (1920). She achieved wide popularity with The Murder of Roger Ackroyd (1926) and produced a total of eighty novels and short-story collections over six decades. Twenty-four of Christie's best whodunits are now available from Black Dog & Leventhal as part of their bestselling hardcover Agatha Christie Collection.