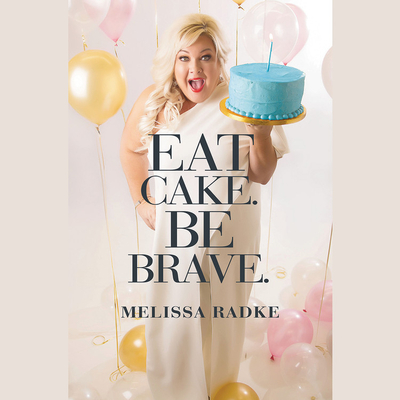 Melissa Radke is a mom from east Texas (Lufkin, to be exact) who writes some of the funniest, most painfully honest essays I have read in a long time. You may know her from her "Red Ribbon Week" rant on social media. In EAT CAKE. BE BRAVE, she shares life experiences that would bring many folks to their knees and reminds the reader that she has value. Read this for some great laughs as well as a reminder of how you should treat yourself and those you love.

My name is Melissa Radke, and there is a very real chance you have no idea who I am or why I wrote a book. But admit it, you're curious

Even though millions of people seem to like watching my videos bemoaning the trials of parenting, marriage, French braiding, faith, and living life as an anti-aging female, you may still be wondering who let me write a book.

I mean, books are written by people who have been interviewed by Gayle King and say things like, You see, Gayle, I was having a root canal and I literally died in the chair. I saw heaven. Also, when I came back to earth I could speak Mandarin.

Yeah, that didn't happen to me. No Mandarin. Though I have been known to break out in song (My voice was once described as a ray of light in a dark world ... but I think my dad was being a little dramatic.) Although if Gayle King were to ever ask me I would tell her: I wrote this book between taking my kids to the local pool and picking out flip-flops at Old Navy, and the only metaphysical moment I experienced came right after I looked directly into one of those mirrors with 10x magnification.

I wrote this book because when I turned 41 I made a decision to be brave. To live brave-bolder and freer. You see, I thought our lives were supposed to change when we turned 40 ... but mine didn't. Yet every piece of it changed when I turned 41; when I set out to prove that it wasn't too late for me, that careless words wouldn't stunt me and rejection would not stop me. And maybe, just maybe, it will take you reading about the journey I took to finding my sense of self-worth in order for you to rightfully believe in yours. This book is about how all the years of my life led up to the one that changed it. So, cut a big slice and raise a fork ...