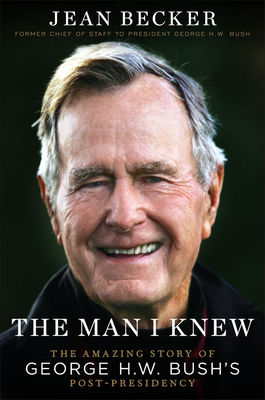 A heartfelt portrait of President George H.W. Bush—and his post-presidential life—by a confidante who knew him well.


As chief of staff, Jean Becker had a ringside seat to the never-boring story of George Herbert Walker Bush's life post-presidency, including being at his side when he died and subsequently facing the challenge-and great honor-of being in charge of his state funeral. Full of heart and wisdom, THE MAN I KNEW is a vibrant behind-the-scenes look into the ups and downs of heading up the office of a former president by one of the people who knew him best.

This book tells the story of how, after his devastating loss to Bill Clinton in 1992, President George H.W. Bush rebuilt his life, found a way to make a difference, and how, by the time he died in November 2018, was revered by his country and the world.

Bush's post-presidency journey was filled with determination, courage, love, hope, humor, fun, and big ideas. He became best friends with the man who defeated him; developed the odd habit of jumping out of airplanes; and learned how to adjust to life in a wheelchair, after having lived most of his life as a high-energy athlete. He joyously saw two sons become governors of their states, one of whom would go one to become President of the United States.

What happens when you go almost overnight from being the most important and powerful person in the world to a private citizen? THE MAN I KNEW tells just such a story, of one man's humble journey from president to man of the people.

Jean Becker was President George H.W. Bush's chief of staff for nearly twenty-five years, from March 1994 until his death on November 30, 2018.

“Jean Becker’s beautiful book, THE MAN I KNEW, is a touching and fascinating look at a man both of us loved and admired—George H.W. Bush. As his chief of staff for almost two decades, Becker lovingly reveals stories about her boss that capture all aspects of his life as the ‘Former Leader of the Free World,’ as he sometimes called himself after leaving the White House. Her book is a must read for anyone interested in one of the very best presidents in our history.”—James A. Baker III

"Other than Barbara Bush, Jean Becker probably knew George H.W. Bush better than anyone, so her enchanting, moving and altogether wonderful memoir of her years as his chief of staff is aptly titled. THE MAN I KNEW is an important—no, necessary—addition to the shelf of books about the most beautifully-souled man who ever led this country."—Christopher Buckley

"What really stunned me about President Bush 41 is that eventually his impression of me doing him was better than my original impression of him. No one said ‘na ga da it’ (not going to do it) quite like 41! I am honored that our friendship is part of this funny, insightful book of a man I came to greatly admire.”—Dana Carvey

“With her ever-sharp eyes, ears and pen, Jean Becker has given us the last great book on George H. W. Bush—the story of a former president who knew how to live and how to die and how to keep his friends and loved ones close—and laughing—all the way.” —Michael Duffy

“Jean Becker’s intimate portrait of President George H. W. Bush captures the essence of this extraordinary public servant who devoted his life to leading by example and inspiring the best in all of us who had the privilege of knowing him. His service continued in his post presidency life, and Jean’s deliciously funny, magnanimous remembrance is a timely reminder of a man who taught us how to become a kinder, gentler nation."—Valerie Jarrett

“What I love best about THE MAN I KNEWis the reader will be reintroduced to the funny, dear, generous—did I say funny?—father I adored. I am grateful to Jean Becker for sharing her stories from the 25 years she was my dad’s chief of staff. Even I heard a few things I didn’t know!” —Doro Bush Koch

"Jean Becker was Poppy Bush’s very own beloved, personal Point of Light. And she remains the Keeper of the Flame for all those honored to be among 41’s Foxhole Buddies, who to a (wo)man credit the remarkable leader for their favorite memories, best attributes, and dedication to public service. In her highly skilled hands, Becker captures the unique history, humanity and humility of the man beloved by multi-generational legions across the political spectrum. THE MAN I KNEW offers readers an authentic, in-the-room, flesh and blood portraiture of a larger-than-life American hero in action, always steady at the helm in unsteady times, with critical lessons for our own turbulent times."—Mary Matalin

"With grace, wit, insight, and a loving but not uncritical eye, Jean Becker has given us a great gift: a moving, honest, and illuminating portrait of the final decades of one of the finest men in American history. This terrific book shows us that George H.W. Bush was always more complicated and more interesting than his public image, and Becker's first-hand report of his long and consequential post-presidency reminds us anew of how lucky America and the world were that the 41st President chose a life in the arena. THE MAN I KNEW is an invaluable addition to the canon of American presidential literature."

“…whatever he accomplished in office, the elder Bush succeeded marvelously in the 26 years after he left.”—Kirkus