Paris Daillencourt Is About to Crumble (Winner Bakes All #2) (Paperback) 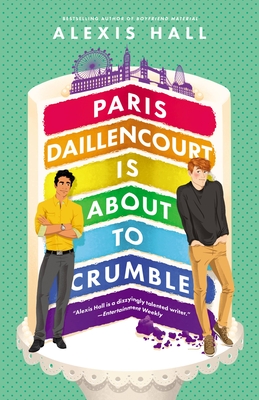 This is book number 2 in the Winner Bakes All series.

When Paris' roommate enters him in Bake Expectations, his anxious brain tells him he'll be the first one eliminated and will make a fool of himself on national television. Instead, he wins the first week's challenge and meets Tariq, a cute confident contestant. Their burgeoning relationship isn't enough to stave off the doubts in Paris' head, causing things to falter. Readers will be turning the pages to learn who will win this season's contest as well as whether or not Paris and Tariq will work things out.

From the bestselling author of Boyfriend Material comes a sweet and scrumptious romantic comedy about facing your insecurities, finding love, and baking it off, no matter what people say.

Paris Daillencourt is a recipe for disaster. Despite his passion for baking, his cat, and his classics degree, constant self-doubt and second-guessing have left him a curdled, directionless mess. So when his roommate enters him in Bake Expectations, the nation’s favourite baking show, Paris is sure he’ll be the first one sent home.

But not only does he win week one’s challenge—he meets fellow contestant Tariq Hassan. Sure, he’s the competition, but he’s also cute and kind, with more confidence than Paris could ever hope to have. Still, neither his growing romance with Tariq nor his own impressive bakes can keep Paris’s fear of failure from spoiling his happiness. And when the show’s vicious fanbase confirms his worst anxieties, Paris’s confidence is torn apart quicker than tear-and-share bread.

But if Paris can find the strength to face his past, his future, and the chorus of hecklers that live in his brain, he’ll realize it’s the sweet things in life that he really deserves.

Alexis Hall lives in a little house in the south east of England where he writes books about people who bake far better than he does. He can, however, whip up a passable brownie if pressed.

"[Hall] crafts some of the most sparkling prose in contemporary romance. . . . we give this fully baked concept our highest compliments."—Entertainment Weekly on Rosaline Palmer Takes the Cake, A-

"In this delicious romantic comedy . . . Hall creates a memorable cast of characters, from Rosaline's supportive ex-girlfriend to the utterly adorable and scene-stealing Amelie. Setting the book at a reality TV show is a brilliant choice . . . there's sparkling humor and plenty of baking mishaps. A perfect bake."—Kirkus, Starred Review, on Rosaline Palmer Takes the Cake

"Hall seamlessly combines humor, romance, and drama to create a story that is intimately believable and at once cozy and sexy. . . . The book combines sweet escapism and poignant cultural touchstones with well-crafted characters and hilariously familiar settings. Hall does it again with this culturally relevant, wonderfully escapist foray into the baking world. This is a must-buy for any library."—Library Journal, Starred Review, on Rosaline Palmer Takes the Cake

"Hall’s creation is a joy—a deeply emotional and ultimately rewarding story about a woman finding her true path and true love, surrounded by delicious baked goods on a BBC soundstage."—Bookpage on Rosaline Palmer Takes the Cake

"A romance that's made for fans of the UK's Great British Bakeoff."—Oprah Daily on Rosaline Palmer Takes the Cake

"[A] romance perfect for fans of The Great British Bake Off!"—Book Riot on Rosaline Palmer Takes the Cake

"With loads of wit and baking-related banter . . . perfect for fans of the Great British Bake Off and Hall’s trademark humour."—The Nerd Daily on Rosaline Palmer Takes the Cake

"A must-read."—Hypable on Rosaline Palmer Takes the Cake