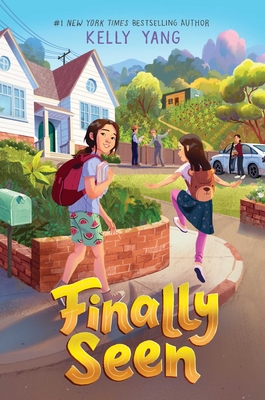 Lina Gao has been raised by her grandparents for the past five years after her parents left China for LA and took only her sister. Feeling a sense of loneliness, Lina asks to join her family in LA. It is only when she arrives that she realizes the life they talked about did not truly exist. As she tries to understand how her family has lived during their time apart, Lina must start school again, which makes her nervous as she is still learning English and fears judgment from her peers. While Lina is feeling many emotions, she does her best to keep them to herself, making it harder for her to enjoy being back with her family. Follow Lina on her journey as she learns to navigate the change alongside her friends and family.

From the New York Times bestselling author of Front Desk comes a gripping middle grade novel about a young girl who leaves China to live with her parents and sister, after five years apart, and learns about family, friendship, and the power of being finally seen.

When ten-year-old Lina Gao steps off the plane in Los Angeles, it’s her first time in America and the first time seeing her parents and her little sister in five years! She’s been waiting for this moment every day while she lived with her grandmother in Beijing, getting teased by kids at school who called her “left behind girl.” Finally, her parents are ready for her to join their fabulous life in America! Except, it’s not exactly like in the postcards:

1. School’s a lot harder than she thought. When she mispronounces some words in English on the first day, she decides she simply won’t talk. Ever again.

2. Her chatty little sister has no problem with English. And seems to do everything better than Lina, including knowing exactly the way to her parents’ hearts.

3. They live in an apartment, not a house like in Mom’s letters, and they owe a lot of back rent from the pandemic. And Mom’s plan to pay it back sounds more like a hobby than a moneymaker.

As she reckons with her hurt, Lina tries to keep a lid on her feelings, both at home and at school. When her teacher starts facing challenges for her latest book selection, a book that deeply resonates with Lina, it will take all of Lina’s courage and resilience to get over her fear in order to choose a future where she’s finally seen.

* In this involving, realistic chapter book, a likable character overcomes a series of obstacles while forging strong connections with her parents, her sister, and two friends. Yang...writes with a beguiling combination of clarity, simplicity, and immediacy in a new story exploring the practical and emotional challenges of immigration as experienced by children.
— Booklist, starred review

"Yang covers a lot of ground, from immigrant experiences and socio-economic inequities to climate change and middle school angst. The plotline that really stands out, however, is when Lina discovers that books can comfort the struggling, link people together, and create changes both internal and external. This theme propels the action through the book’s satisfying climax when she must decide whether to use her voice to stop a book that she loves from being banned in her classroom.

"As Lina attempts to adapt, facing bullying at school, she finds solace in the form of an encouraging teacher, new friends, and the school library. And gradually, when a class book selection that resonates deeply with Lina is challenged, her growing confidence develops into a tool she can use to speak out. In a thematically wide-ranging, character-driven novel, Yang (Front Desk) highlights the importance of representation alongside one child’s experience of navigating a complex reality."
— Publishers Weekly

"Yang does a skillful job in portraying Lina’s multitude of emotions. There’s the sadness of leaving her grandmother behind in a Chinese nursing home and the isolation and loneliness stemming from her imperfect English. Issues of racism and class come up when Lina is teased at school, an Asian American graphic novel is targeted for censorship, and her parents struggle to be paid fairly and to get updates on their green card applications."
— Horn Book Magazine