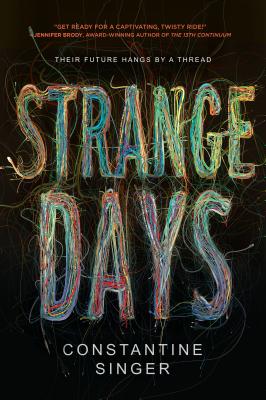 Contemporary fiction with a sci-fi edge, perfect for fans of Ernest Cline and Marie Lu.

Alex Mata doesn't want to worry about rumors of alien incursions--he'd rather just skate and tag and play guitar. But when he comes home to find an alien has murdered his parents, he's forced to confront a new reality: aliens are real, his parents are dead, and nobody will believe him if he tells. On the run, Alex finds himself led to the compound of tech guru Jeffrey Sabazios, the only public figure who stands firm in his belief that aliens are coming.

At Sabazios's invitation, Alex becomes a Witness, one of a special group of teens gifted with an ability that could save the Earth: they can glide through time and witness futures. When a Witness sees a future, that guarantees it will happen the way it's been seen, making their work humanity's best hope for stopping the alien threat. Guided by Sabazios, befriended by his fellow time travelers, and maybe even falling in love, Alex starts feeling like the compound is a real home--until a rogue glide shows him the dangerous truth about his new situation.

Now in a race against time, Alex is forced to reevaluate who he can love, who he can trust, and who he needs to leave behind.

Debut author Constantine Singer's fresh-voiced protagonist leaps off the page in this captivating novel that weaves sci-fi and contemporary fiction.

Constantine Singer grew up in Seattle and earned his BA from Earlham College and his Masters from Seattle University. He currently lives in the Echo Park neighborhood of Los Angeles with his family and teaches history at a high school in South LA. He is of the opinion that all foods are better eaten as a sandwich or a taco. This is his first novel.