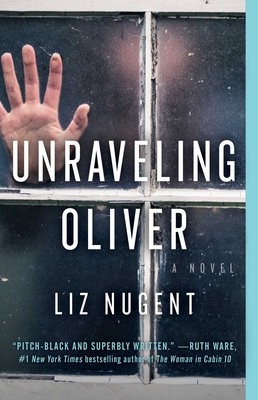 “Oliver, the titular center of Liz Nugent's chilling debut thriller, will attract and repel the reader as his deep wounds and legacy of destruction are revealed by his own confessions and by the recollections of those whose lives intersect with his. The novel opens with Oliver, a successful writer living in apparent domestic contentment, beating his wife into a coma. Why? As Oliver's crimes come into focus, Nugent's brilliance is in balancing the evil he does with the evil that is done to him. Is he to be reviled or pitied? Or both?”
— Anmiryam Budner, Main Point Books, Bryn Mawr, PA

“Searing, searching, finally scorching. Think Making a Murderer via Patricia Highsmith: an elegant kaleidoscope novel that refines and combines multiple perspectives until its subject is brought into indelible, tragic focus.” —A. J. Finn, #1 New York Times bestselling author of The Woman in the Window

Oliver Ryan has the perfect life. Elegant and seductive, he wants for nothing, sharing a lovely home with his steadfast wife, Alice, who illustrates the award-winning children’s books that have brought him wealth and fame. Until one evening, after eating the dinner Alice has carefully prepared, Oliver savagely assaults her and leaves her for dead.

The people who know Oliver can only speculate about the reasons behind his brutal act: his empty-headed mistress Moya, vain and petulant; Veronique, the French chatelaine who tragically lost everything the summer she employed him in her vineyard; Alice’s friend Barney, who has nursed an unrequited love for her since childhood; Oliver’s college pal Michael, struggling with voiceless longings that have shamed him for years. What none of them understands is the dark secret that lies behind his immaculate façade.

The revelations that come to light as the layers of Oliver’s past are peeled away are as brutal as his singular act of violence. His decades of careful deception have masked a life irrevocably marked by abandonment, envy, and shame—and as the details of that life are laid bare, Oliver discovers that outrunning his demons is harder than it looks.

With its insight into the mind of a psychopath emerging from the wreckage of his own misbegotten past, Unraveling Oliver is a chilling page-turner, brilliantly crafted and unexpectedly moving, by a stunning new voice in fiction. Liz Nugent "presents a fresh look at a man hiding his violent personality in this intense character study" (Publishers Weekly, starred review). As powerful as Patricia Highsmith’s unforgettable noir classic, The Talented Mr. Ripley, Unraveling Oliver will enthrall you from its mesmerizing opening line to its equally shocking last page.

Liz Nugent has worked in Irish film, theater, and television for most of her adult life. She is an award-winning writer of radio and television drama and has written critically acclaimed short stories both for children and adults, as well as the bestselling novels Unraveling Oliver and Lying in Wait. She lives in Dublin. Visit her at LizNugent.ie or follow her on Twitter at @Lizzienugent.