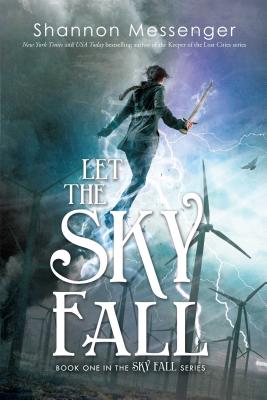 This is book number 1 in the Sky Fall series.

“Vane is just a normal guy, shuffling through his summer vacation and cursing his bad luck with girls. When Audra shows up, Vane gets the surprise of his life: Not only is he distinctly the opposite of normal, he's not even human. He's a sylph, gifted with the ability to control the four winds. And, to further complicate Vane's life, it turns out that he might be the only one with the specific talents to save the Earth from carnage and destruction. As Audra and Vane struggle to prepare for the showdown that's sure to come, they encounter a raft of complications, not the least of which is their growing attraction. In the end, Vane must summon strength he never knew he had in order to save himself, the human race, and the girl he loves.”
— Megan Graves, Hooray for Books!, Alexandria, VA

A broken past and a divided future can’t stop the electric connection of two teens in this epic series opener from the author of the New York Times and USA TODAY bestselling Keeper of the Lost Cities series.

Seventeen-year-old Vane Weston has no idea how he survived the category five tornado that killed his parents. And he has no idea if the beautiful, dark-haired girl who’s swept through his dreams every night since the storm is real. But he hopes she is.

Seventeen-year-old Audra is a sylph, an air elemental. She walks on the wind, can translate its alluring songs, and can even coax it into a weapon with a simple string of commands. She’s also a guardian—Vane’s guardian—and has sworn an oath to protect Vane at all costs. Even if it means sacrificing her own life.

When a hasty mistake reveals their location to the enemy who murdered both of their families, Audra’s forced to help Vane remember who he is. He has a power to claim—the secret language of the West Wind, which only he can understand. But unlocking his heritage will also unlock the memory Audra needs him to forget. And as the storm bears down on them, she starts to realize the greatest danger might not be the warriors coming to destroy them—but the forbidden romance that’s grown between them.