This Side of Salvation (Hardcover) 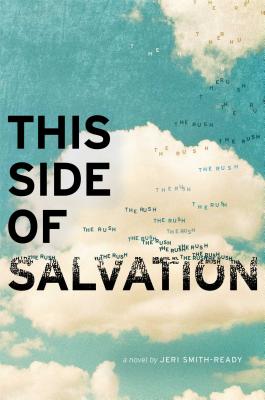 David confronts his desires and his demons in this novel about what it means to be left behind—literally, figuratively, and spiritually—from the author of the Shade trilogy.

Everyone mourns differently. When his older brother was killed, David got angry. As in, fist-meets-someone-else’s-face furious. But his parents? They got religious. David’s still figuring out his relationship with a higher power, but there’s one thing he knows for sure: The closer he gets to Bailey, the better, brighter, happier, more he feels.

Then his parents start cutting all their worldly ties in preparation for the Rush, the divine moment when the faithful will be whisked off to Heaven…and they want David to do the same. David’s torn. He likes living in the moment, and isn’t sure about giving up his best friend, varsity baseball, and Bailey—especially Bailey—in hope of salvation.

But when he comes home late from prom, and late for the Rush, to find that his parents have vanished, David is in more trouble than he ever could have imagined…

Jeri Smith-Ready is the award-winning author of the Shade trilogy, the WVMP Radio series, and the Aspect of Crow trilogy. She lives in Maryland with her husband and two cats. Like many of her characters, Jeri loves music, movies, and staying up very, very late. Visit her at JeriSmithReady.com or follow her on Twitter at @jsmithready.

STARRED REVIEW "David’s approach to problem-solving is shot through with wisdom he has learned through baseball; indeed, his multi-dimensionality, as a baseball player, a devoted son, a strong Christian, an anxious boyfriend, and a sometimes impulsive little brother make him a standout character with unexpected depths in this unusual and insightful family story."
— BCCB

STARRED REVIEW "A frighteningly realistic story that delicately handles the issues of religion and family—an emotional mystery sure to be popular and perfect for discussion."
— VOYA

STARRED REVIEW "[Brings] to light issues of belief versus free will, spirit versus body, and family versus self—while never being heavy handed. An eye-opening look at the limits, uses, and misuses of faith.
— Booklist