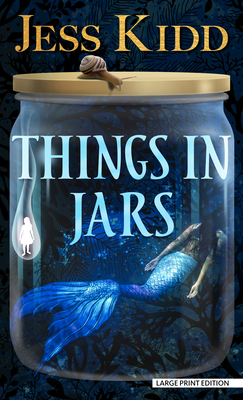 “Set in Victorian England, Things in Jars feels like a Sherlock Holmes story, if Holmes had been a woman. You can’t help but love Bridie Devine, a strong-willed, chain-smoking woman who has clawed her way from life as an orphaned thief to a highly sought-after detective often consulted by Scotland Yard. Bridie’s newest case, though, is proving difficult and incredibly strange. Not only will it force her to confront someone from her past who she thought was dead, she’ll also team up with an actual ghost as she solves a fantastical crime. Highly imaginative, Things in Jars is a fun and immersive read.”
— Jamie Southern, Bookmarks, Winston-Salem, NC

“A searingly fantastical and addictive novel about a kidnapped girl who calls water, snails, and other wet things to her, a girl who can kill a man with one bite. Many whimsical moving parts come together to create a Victorian cat-and-mouse chase of supernatural proportions.”
— Lauren Nopenz Fairley, Curious Iguana, Frederick, MD

In this "miraculous and thrilling" (Diane Setterfield, #1 New York Times bestselling author) mystery for fans of The Essex Serpent and The Book of Speculation, Victorian London comes to life as an intrepid female sleuth wades through a murky world of collectors and criminals to recover a remarkable child. Bridie Devine--flame-haired, pipe-smoking detective extraordinaire--is confronted with the most baffling puzzle yet: the kidnapping of Christabel Berwick, secret daughter of Sir Edmund Athelstan Berwick, and a peculiar child whose reputed supernatural powers have captured the unwanted attention of collectors in this age of discovery. Winding her way through the sooty streets of Victorian London, Bridie won't rest until she finds the young girl, even if it means unearthing secrets about her past that she'd rather keep buried. Luckily, her search is aided by an enchanting cast of characters, including a seven-foot-tall housemaid; a melancholic, tattoo-covered ghost; and an avuncular apothecary. But secrets abound in this foggy underworld where nothing is quite what it seems. Blending darkness and light, Things in Jars is a stunning, "richly woven tapestry of fantasy, folklore, and history" (Booklist, starred review) that explores what it means to be human in inhumane times.