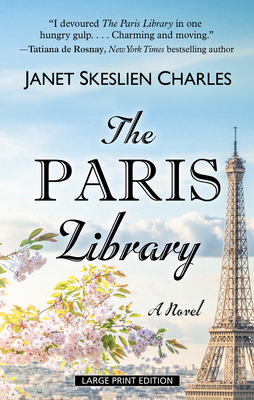 In two different voices, we learn the story of the American Library in Paris during the occupation. Odile is thrilled to have a job there among the treasured stacks. Her police commissar father is less than happy. Her twin brother Remy cherishes the new connection, especially the children's librarian Bitzi. But as war approaches, the closeness and camaraderie is split apart. The alternating story is told by Lily, a young girl in Froid, Montana during the 1980's. She must write a report about something distant so she decides to interview the prickly French widow next door. There the friendship begins and their life journeys intertwine.

“I can’t think of a more perfect novel to recommend to book lovers than The Paris Library! Not only does it bring to life the true story of the heroic librarians of the American Library in Nazi-occupied Paris, its interwoven narrative of a bereft teenager in 1980s Montana who finds a kindred spirit in her mysterious, reclusive, and book-loving French neighbor is a feat of extraordinary storytelling. The Paris Library is a testament to the everlasting power of literature and literary places to bring people together and be a home for everyone, even during our darkest, most hopeless, and divided times.”
— Alyssa Raymond, Copper Dog Books, Beverly, MA