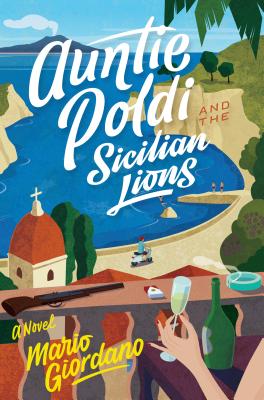 Meet Poldi, a 50-year old German widow who has moved to Sicily to drink herself to death. But fate intervenes, and when Poldi's handyman turns up dead, she has a mystery to solve. In what appears to be the first book in a series about this unlikely but likeable amateur sleuth, Poldi's nephew, a would-be novelist, narrates the details of the case as described to him by his hard drinking sexy aunt. It's a delightful romp, with Poldi enlisting her relatives and neighbors in her attempt to solve the mystery before the handsome Inspector Montana (with whom she is having an on-again-off-again fling) can find the murderer. With quirky characters and redolent with Sicilian flavors, this is an entertaining novel that's much more than a simple mystery story. Translated from the Italian. Recommended.

“Introducing Auntie Poldi, a sixtyish amateur sleuth who stars as the heroine of Giordano's new series of delicious mysteries. She's sexy, outrageous, can't mind her own business, and has just retired to Sicily, where she intends to lay about and drink good wine for the rest of her days on the world's most fabulous island. Of course, things are soon stirred up by the murder of her hot young handyman, and Poldi becomes deeply involved. Great characters, fun plot, Italian charm - and what could be better reading for the chilly months than a novel set in sun-soaked Sicily? Don't miss what the Times Literary Supplement calls 'a masterful treat.'”
— Lisa Howorth, Square Books, Oxford, MS

“What a delicious treat! Auntie Poldi is a lascivious, boozy woman of a certain age who readers will follow anywhere, but especially into sun-soaked Sicily. She has a thing for handsome Italian cops and afternoon gin and tonics, and manages to solve the occasional murder along the way. Mario Giordano’s gorgeous, literary prose offers all the escapist pleasure of a novel like Beautiful Ruins, with an added bonus—there’s a sequel coming!”
— Amy Stewart, Eureka Books, Eureka, CA

An Indie Next Pick

On her sixtieth birthday, Auntie Poldi retires to Sicily intending to while away her days with good wine, a view of the sea, and few visitors. But Sicily isn't quite the tranquil island she thought it would be. When her handsome young handyman is murdered, she can't help but ask questions. Soon there's a smoldering police inspector, a romantic entanglement, false leads, a rooftop showdown, and finally Poldi herself, slightly tousled but still perfectly poised.