The Girl Who Drank the Moon (Large Print / Hardcover) 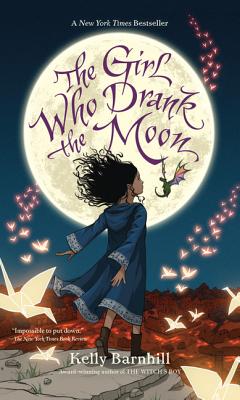 There is magic in the forest that surrounds the Protectorate—magic, witches, monsters and dragons, some good and much evil. To placate an evil witch, every year on the Day of Sacrifice, by the Elders’ decree, the people of the Protectorate leave the village’s youngest baby in the forest to die. The Elders know there is no witch, but the villagers comply unquestioningly and live their lives burdened by sorrow. And every year without anyone’s knowledge, the kindhearted witch Xan rescues those babies, finding new families for them in the Free Cities. One year, Xan accidentally feeds the latest sacrificed baby moonlight, enmagicking this tiny girl. Xian calls her Luna, and raises her as her own in the woods with the help of her trusty friends, a swamp monster and a perfectly tiny dragon. As the years pass, Luna’s untrained magic explodes while Xan’s weakens. Meanwhile, a few villagers have begun to question their customs: a young father resolves to kill the witch to save his own youngest baby and free his village, and Luna’s own mother escapes her prison tower to wreak her own revenge on the witch. But there is an even more menacing force lurking about, and as they all converge in the forest, it will take the most powerful magic of all to overcome evil. Barnhill’s lyrical storytelling, perfect for reading aloud, is sure to cast a spell on readers. Highly recommended for grades 4 and above.