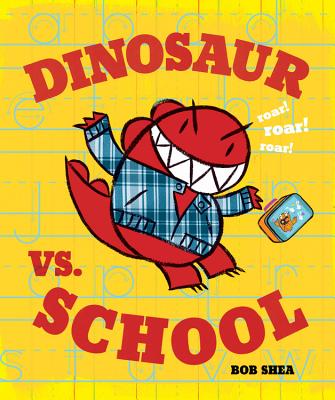 This is book number 5 in the A Dinosaur vs. Book series.


Bob Shea (www.bobshea.com) is the author-illustrator of several picture books on the Disney-Hyperion list, such as UNICORN THINKS HE'S PRETTY GREAT, BUDDY AND THE BUNNIES IN: DON'T PLAY WITH YOUR FOOD, and four books in the DINOSAUR VS. series. He also created animations, graphics, and logos that have been seen on Comedy Central, PBS, Nick Jr., and Noggin. He and his wife, Colleen, run their own graphic design company called Perfectly Nice, and their son Ryan inspired the character Dinosaur. When Bob isn't out on the road promoting his books, he lives and works in Madison, Connecticut.

PRAISE FOR DINOSAUR VS. BEDTIME

*" Kids will be only too happy to capitulate to this irresistible package."—Publishers Weekly (starred review)

PRAISE FOR DINOSAUR VS. THE POTTY

*"Shea's bold collages are as in-your-face charming as his energetic hero, whose exuberance and stubborn avoidance of the potty will elicit both empathy and laughter."—Publishers Weekly (starred review)

PRAISE FOR DINOSAUR VS. THE LIBRARY

PRAISE FOR DINOSAUR VS. SANTA

"Dinosaur's unbridled energy is as infectious as ever."—Publishers Weekly