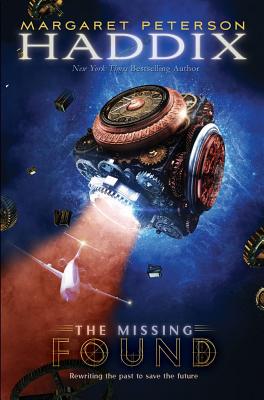 This is book number 1 in the The Missing series.

Thirteen-year-old Jonah has always known that he was adopted, and he's never thought it was any big deal. Then he and a new friend, Chip, who's also adoped, begin receiving mysterious letters. The first one says, "You are one of the missing." The second one says, "Beware! They're coming back to get you."

Jonah, Chip, and Jonah's sister, Katherine, are plunged into a mystery that involves the FBI, a vast smuggling operation, an airplane that appeared out of nowhere -- and people who seem to appear and disappear at will. The kids discover they are caught in a battle between two opposing forces that want very different things for Jonah and Chip's lives.

Do Jonah and Chip have any choice in the matter? And what should they choose when both alternatives are horrifying?

With Found, Margaret Peterson Haddix begins a new series that promises to be every bit as suspenseful as her Shadow Children series -- which has sold more than 41/2 million copies -- and proves her, once again, to be a master of the page-turner.

Margaret Peterson Haddix is the author of many critically and popularly acclaimed YA and middle grade novels, including the Children of Exile series, The Missing series, the Under Their Skin series, and the Shadow Children series. A graduate of Miami University (of Ohio), she worked for several years as a reporter for The Indianapolis News. She also taught at the Danville (Illinois) Area Community College. She lives with her family in Columbus, Ohio. Visit her at HaddixBooks.com.

* "In a tantalizing opener to a new series, Haddix taps into a common childhood fantasy--that you are really the offspring of royalty or famous people, and were somehow adopted by an ordinary family--and one-ups it by adding in time travel...Readers will be hard-pressed to wait for the next installment."--Publishers Weekly, starred review

"Haddix admirably balances the exposition necessary to shape the first novel of a series while still providing enough life-threatening situations, governmental intrigue, and futuristic weaponry to make this an action-packed stand-alone novel. Readers will surely return for future installments...Science fiction and adventure fans will find much to enjoy in this flashy, suspensful volume."--The Bulletin of the Center for Children's Books

"Fans of Haddix's Shadow Children books will want to jump on this time-travel adventure...The author grabs the readers' attention from the first scene...intriguing enough...to keep kids reading what promises to be an exciting trip through history."--Kirkus Reviews

"As in her Among the Hidden series, Haddix once again demonstrates her talent for penning page-turnes kids will like."--Booklist

"Haddix's latest science fiction series starts off with a bang in this nail-biter...This book's exciting premise and cliff-hanger ending will leave readers on the edge of their seats and begging for more."--School Library Journal