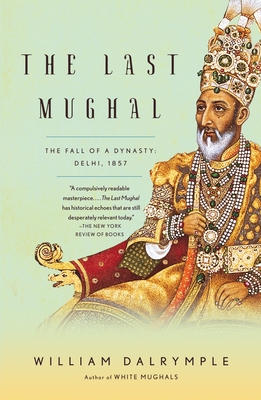 In this evocative study of the fall of the Mughal Empire and the beginning of the Raj, award-winning historian William Dalrymple uses previously undiscovered sources to investigate a pivotal moment in history.

The last Mughal emperor, Zafar, came to the throne when the political power of the Mughals was already in steep decline. Nonetheless, Zafar—a mystic, poet, and calligrapher of great accomplishment—created a court of unparalleled brilliance, and gave rise to perhaps the greatest literary renaissance in modern Indian history. All the while, the British were progressively taking over the Emperor's power. When, in May 1857, Zafar was declared the leader of an uprising against the British, he was powerless to resist though he strongly suspected that the action was doomed. Four months later, the British took Delhi, the capital, with catastrophic results. With an unsurpassed understanding of British and Indian history, Dalrymple crafts a provocative, revelatory account of one the bloodiest upheavals in history.

William Dalrymple is the author of seven previous works of history and travel, including City of Djinns, which won the Young British Writer of the Year Prize and the Thomas Cook Travel Book Award; and From the Holy Mountain; White Mughals, which won Britain’s Wolfson History Prize. He is a contributor to The New York Review of Books and The New Yorker. He divides his time between New Delhi and London.

“A compulsively readable masterpiece. . . . Every chapter of The Last Mughal has historical echoes that are still desperately relevant today.” —The New York Review of Books “Deeply researched and beautifully written. . . . A poignant account of the events of 1857 in Delhi.” —The Nation“There is so much to admire in this book - the depth of historical research, the finely evocative writing, the extraordinary rapport with the cultural world of late Mughal India. It is also in many ways a remarkably humane and egalitarian history . . . This is a splendid work of empathetic scholarship.” —David Arnold, Times Literary Supplement