The Seven Torments of Amy and Craig (A Love Story) (Hardcover) 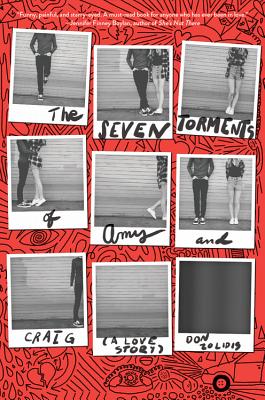 Janesville, Wisconsin (cold in the sense that there is no God)
1994
The best thing that's ever happened to Craig is also the worst: Amy. Amy and Craig never should've gotten together. Craig is an awkward Dungeons & Dragons-playing geek, and Amy is the beautiful, fiercely intelligent student-body president of their high school.
Yet somehow they did?until Amy dumped him. Then got back together with him. Then dumped him again. Then got back together with him again. Over and over and over.
Unfolding during their senior year, Amy and Craig's exhilarating, tumultuous relationship is a kaleidoscope of joy, pain, and laughter as an uncertain future-and adult responsibility-loom on the horizon.
Craig fights for his dream of escaping Janesville and finding his place at a quirky college, while Amy's quest to uncover her true self sometimes involves being Craig's girlfriend?and sometimes doesn't.
Seven heartbreaks. Seven joys.Told nonsequentially, acclaimed playwright Don Zolidis's debut novel is a brutally funny, bittersweet taste of the utterly unique and universal experience of first love.

Don Zolidis grew up in Wisconsin, went to college in Minnesota, and is mostly known for being a really funny playwright. For the past five years, he's been the most-produced playwright in American schools. His more than one hundred published plays have been performed tens of thousands of times, and have appeared in sixty-four different countries. He currently splits his time between New York and Texas, and has two adorable boys who will someday read this book and have a lot of questions. He aspires to owning a dog. The Seven Torments of Amy and Craig is his first novel. He's hard at work on the next one.

"Craig's wry, self-absorbed, and self-deprecating voice carries this slice-of-life love story to a higher plane. Readers, like Amy, will fall in love with him even as they want to shake him... Packed with fantastic dialogue and vivid staging... A thoroughly absorbing, authentic and entertaining read."—Shelf Awareness

"Paying light homage to John Hughes movies via a mid-'90s setting, Zolidis handles the on-and-off relationship with humor and heart while deftly weaving through the more difficult subject matter."—Publishers Weekly

"Funny, painful, and starry-eyed. A must-read book for anyone who has ever been in love."—Jenny Boylan, author of The Long Black Veil and She's Not There