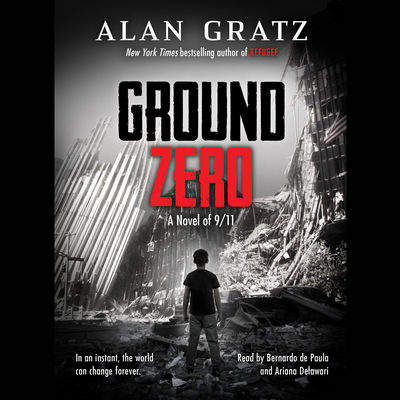 Told in alternating stories, Ground Zero connects Brandon, a boy who was at the World Trade Center in NYC on 9/11 in 2001 to Reshmina, a young girl who lives in an isolated Afghanistan village several years later. Brandon experiences the horrific confusion and desperate acts of survival during the terror attack while Reshmina has lived in an unstable, battle-filled region of the world her entire life and faces the consequences of trying to help a wounded US soldier. Fast paced, filled with heart and soul. A must read!

In time for the twentieth anniversary of 9/11, master storyteller Alan Gratz (Refugee) delivers a pulse-pounding and unforgettable take on history and hope, revenge and fear -- and the stunning links between the past and present.

September 11, 2001, New York City: Brandon is visiting his dad at work, on the 107th floor of the World Trade Center. Out of nowhere, an airplane slams into the tower, creating a fiery nightmare of terror and confusion. And Brandon is in the middle of it all. Can he survive -- and escape?

September 11, 2020, Afghanistan: Reshmina has grown up in the shadow of war, but she dreams of peace and progress. When a battle erupts in her village, Reshmina stumbles upon a wounded American soldier named Taz. Should she help Taz -- and put herself and her family in mortal danger?

Two kids. One devastating day. Nothing will ever be the same.

Alan Gratz is the New York Times bestselling author of several highly acclaimed books for young readers, including Allies, Grenade,Refugee, Projekt 1065, Prisoner B-3087, and Code of Honor. Alan lives in North Carolina with his wife and daughter. Look for him online at alangratz.com.