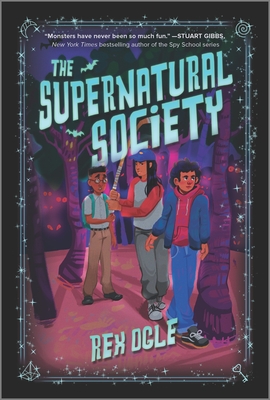 This is book number 1 in the Supernatural Society series.

Will thinks his life can't get any worse - his parents just got divorced and his mom moves them to East Emerson, which is in the middle of nowhere. Suddenly, Will realizes that he's the only person who can see monsters all over town and his dog Fitz goes missing. It's up to Will and his neighbors to get to the bottom of the mysteries in East Emerson. The Supernatural Society is creepy, hilarious and scary, often all at the same time. Full of emotional intelligence and the representation Rex wishes he saw in books as a child, this is a great fit for so many readers!

"Monsters have never been so much fun." -Stuart Gibbs, New York Times bestselling author of the Spy School series

Readers will be scared silly in this spooky and hilarious middle grade series starter about a town chock-full of monsters and the kids who must unravel centuries of secrets to save it.

Will Hunter thought his life couldn't get any worse: But Will was wrong--things are about to get way worse. Because East Emerson is filled with a whole lot of monsters, and he's the only person who can see them.

When all the town pets (including Fitz) go missing, Will suspects there's something sinister going on. So he joins forces with outcast Ivy and super-smart Linus to uncover the ancient secrets of East Emerson. Besides, nothing bad could happen when three sixth graders team up against monsters, magic, myths, and mad science . . . right?