Courage: My Story of Persecution (I, Witness) (Hardcover) 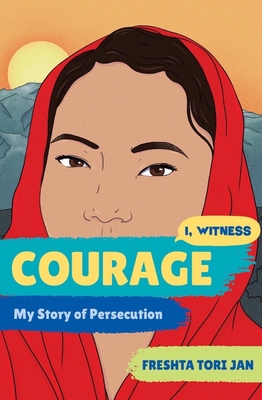 This is the author's story of her life as a child in Afghanistan as the Taliban were coming back into power over the past dozen years. As a member of the Hazzari minority, Freshta and her family were persecuted by both the Taliban and other Afghanis, suffering both mental and physical abuse. Simply told, but with vivid descriptions of her experiences, this story reveals a personal side to what we have been hearing about in world news.

Continuing this propulsive middle grade nonfiction series, a young woman once persecuted by the Taliban shares her journey to becoming a community activist.

As a girl and as part of an ethnic minority in Afghanistan, Freshta Tori Jan was persecuted relentlessly. Her family faced kidnappings and daily murder attempts on the bus, on the way to school, in the workplace, and beyond. Freshta’s school was shut down by the Taliban, and many of her friends were murdered and shot. Her journey through poverty, terrorism, and other forms of injustice has enabled her to be a voice for those unable to share their stories and those unable to receive the opportunities she has sought. She believes in empowering youth in order to bring about change and be the leaders of today and tomorrow.

With a voice that is both accessible and engaging, Freshta brings forward a captivating first-person account of strength, resilience, and determination, and delivers compelling narrative nonfiction by young people, for young people.

Freshta Tori Jan is a student at Calvin College, the founder of Sew True Products, and serves as a public speaker for marginalized groups. She lives in Grand Rapids, Michigan.