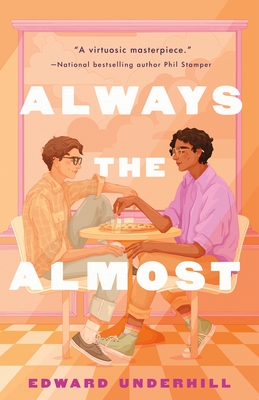 Sixteen-year-old trans boy Miles Jacobson wants to win back his ex-boyfriend and win a prestigious classical piano competition, but when Eric Mendez, a queer boy, moves to town, Miles reconsiders what he really wants. Engaging characters and a beautifully unfolding plot combine to make this a coming of age story full of joy.

A trans pianist makes a New Year's resolution on a frozen Wisconsin night to win regionals and win back his ex, but a new boy complicates things in Edward Underhill's heartfelt debut YA rom-dram, Always the Almost.

Sixteen-year-old trans boy Miles Jacobson has two New Year’s resolutions: 1) win back his ex-boyfriend (and star of the football team) Shane McIntyre, and 2) finally beat his slimy arch-nemesis at the Midwest’s biggest classical piano competition. But that’s not going to be so easy. For one thing, Shane broke up with Miles two weeks after Miles came out as trans, and now Shane’s stubbornly ignoring him, even when they literally bump into each other. Plus, Miles’ new, slightly terrifying piano teacher keeps telling him that he’s playing like he “doesn’t know who he is”—whatever that means.

Then Miles meets the new boy in town, Eric Mendez, a proudly queer cartoonist from Seattle who asks his pronouns, cares about art as much as he does—and makes his stomach flutter. Not what he needs to be focusing on right now. But after Eric and Miles pretend to date so they can score an invite to a couples-only Valentine’s party, the ruse turns real with a kiss, which is also definitely not in the plan. If only Miles could figure out why Eric likes him so much. After all, it's not like he’s cool or confident or comfortable in his own skin. He’s not even good enough at piano to get his fellow competitors to respect him, especially now, as Miles. Nothing’s ever been as easy for him as for other people—other boys. He’s only ever been almost enough.

So why, when he’s with Eric, does it feel like the only person he’s ever really not been enough for...is himself?

EDWARD UNDERHILL (he/him) is a queer trans man who grew up in the suburbs of Wisconsin, where he could not walk to anything, which meant he had to make up his own adventures. He began writing (very bad) stories as a kid and wrote his first (also very bad) novel in his teens. In college, he studied music composition, before earning a master’s degree in film music composition. After a few years living in very tiny apartments in New York, he moved to California, where by day he writes music and by night he writes stories, which aren’t as bad as they used to be. When not doing either of these things, he’s probably gardening or hanging out with his cat. You can find him online on his website. Always the Almost is his debut novel.

“A sweet queer love story sure to delight any YA rom-com fan.” –Booklist

“Underhill nails every element here, from the wit to the romance to the fun and supportive cast, and you'll definitely be cheering by The End.” --Buzzfeed

“Underhill brings nothing but joy to [this] tender romance.” –PopSugar

“Uplifting, filled with trans joy and a healthy heaping of existential angst, Always the Almost shines with tender self-discovery, nuanced characters, sweet prose and ends up hitting all the right notes.” –The Nerd Daily

“Filled with sparkling joy, tender hope, and resounding heart, Always the Almost is an ode to finding yourself, your people, and your own power.” —Adib Khorram, award-winning author of Darius the Great Is Not Okay

“Always the Almost is a warm-hearted coming of age story about the complexities of friendship, romance, and overcoming adversity both on and off the stage. A virtuosic masterpiece.” —Phil Stamper, bestselling author of As Far as You’ll Take Me

“Deeply witty, romantic, authentic, and above all, triumphant. Edward Underhill is unquestionably a debut to watch.” —Dahlia Adler, author of Cool for the Summer

“An unapologetic story of a trans boy finding love that never shies away from just how messy love can be; this stunning debut made me laugh and then broke my heart into pieces before putting it all back together again.” —Mason Deaver, national bestselling author of I Wish You All the Best and The Ghosts We Keep

"Edward Underhill has composed the perfect piece to tug on your heart. Miles's journey coming into his own shows us that love can take many forms: love of your friends, love of your passions, love for a special someone, and most importantly, love for yourself. Always the Almost is music for the soul!" — Jason June, author of Jay's Gay Agenda and Out of the Blue

“Always the Almost is an empowering, beautifully-written story about rewriting your life, living your truth, and finding joy. Filled with wisdom and warmth, it’s a book that will touch your heart!” —Bill Konigsberg, award-winning author of The Music of What Happens

“This gem of a debut novel exquisitely renders the complexity of friendship, love, and family. It elevates the joy one finds when truly and fully accepting all of who you are, but mostly it's a heart-thumping, great read of a romance. I loved Miles and his journey. You will, too.” —Jaye Robin Brown, author of The Meaning of Birds

“Taking a deep dive into identity and the multi-faceted struggles of being trans in a world that struggles to keep up, Always the Almost is a coming of age story full of heart and heartache that illustrates the power, freedom, and joy of refusing to deny your most honest self.” —Emery Lee, author of Meet Cute Diary and Café con Lychee

“Always the Almost is a thoroughly delightful debut. A nuanced portrait of a trans teen’s coming of age, this book illustrates the deep impact of finding the right mentor, accompanied by pitch-perfect Midwestern queer vibes. An ode to joy.” —Miel Morland, author of It Goes Like This