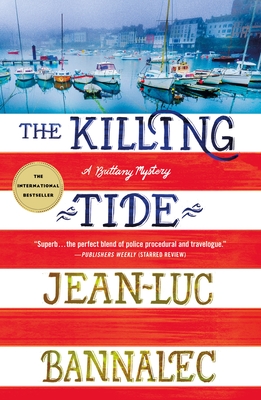 This is book number 5 in the Brittany Mystery Series series.

The Killing Tide by Jean-Luc Bannalec is the fifth novel in the internationally bestselling Commissaire Dupin series.

Deep sea fishers, dolphin researchers, smugglers, and an island shrouded in myth in the middle of the rough Atlantic ocean: Commissaire Dupin had sworn he would never again investigate on the ocean, but his fifth case takes him offshore, off the west coast of Brittany on a beautifully sunny day in June. He lands on the unique Île de Sein, populated by more rabbits than people, where the hairdresser arrives by boat and which was formerly inhabited by powerful witches and even the devil himself. In front of this impressive backdrop—between the islands of Molène, Ouessant, and the bay of Douarnenez—Dupin and his team follow a puzzling case that pushes them to their very limits.

JEAN-LUC BANNALEC is a pseudonym. The author divides his time between Germany and coastal Brittany, France. Death in Brittany, the first case for Commissaire Dupin, was published in German in March 2012 and sold 600,000 copies, spending many months on the bestseller list. It has been sold into 14 countries.

"As captivating and harrowing as its predecessors. An intriguingly constructed mystery...Bannalec’s latest delivers on every level."—Booklist (starred review)

"Dupin’s drive to catch the killer quickly is balanced by his desire to enjoy the local cafes and the breathtaking Breton coast just a little bit longer. And as usual, justice triumphs. More of Bannalec’s winning formula: a healthy chunk of Brittany with a bracing dash of murder."—Kirkus Reviews

Praise for the series:

"Bannelec's Breton adventures are some of the best French local color going, with a deft blend of puzzle, personality, and description of the indescribable."—Kirkus Reviews on The Fleur de Sel Murders

"Well-drawn, complex characters, the lovingly described countryside, and the area’s culinary bounty make this a winner. Some fans will be inspired to take their next vacation in Brittany."—Publishers Weekly on The Fleur de Sel Murders

"Jean-Luc Bannalec... has channeled his affection for the westernmost region of France into a charming first mystery." —New York Times Book Review on Death in Brittany

"A setting to die for... The star of the mystery, though, is Brittany." —Booklist (starred review) on Death in Brittany