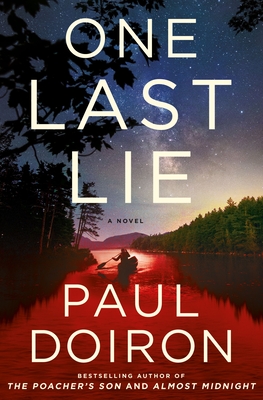 This is book number 11 in the Mike Bowditch Mysteries series.

The disappearance of Mike Bowditch’s beloved mentor reveals an ominous connection to a 15-year-old cold case in One Last Lie, the new thriller from bestselling Edgar Award finalist Paul Doiron.

“Never trust a man without secrets.” These are the last words retired game warden Charley Stevens speaks to his surrogate son, Warden Investigator Mike Bowditch, before the old man vanishes without explanation. Mike suspects his friend’s mysterious departure has to do with an antique warden badge that recently resurfaced at a flea market — a badge connected to a cold case from Charley’s past that the Maine Warden Service would rather forget.

Fifteen years ago, a young warden was sent on an undercover mission to infiltrate a notorious poaching ring and never returned. He was presumed dead, but his body was never recovered. Mike is desperate to find Charley before he meets a similar fate. His investigation brings him to the miles of forest and riverside towns along the Canadian border—but he soon learns that even his fellow wardens have secrets to keep. And Charley’s past isn’t the only one coming to light; his daughter, Stacey, has resurfaced to search for her missing father, and Mike must grapple with the return of the woman he once thought was gone forever.

Forced to question his faith in the man he sees as a father, Mike must reopen a cold case that powerful people—one of whom may be a killer—will do anything to keep closed.

Praise for Paul Doiron and the Mike Bowditch mysteries:

"The characters are well drawn, the Maine landscape is vividly portrayed, and Bowditch pursues his passion to protect the innocent and bring evil doers to justice regardless of personal cost." —Associated Press for Almost Midnight

"Doiron...[ramps] up the tension slowly until the story reaches can't-put-it-down velocity." —Library Journal for Almost Midnight

“As always with a Doiron novel, the characters are so well-drawn you can almost reach out and shake their hands, and the rural landscape is so vividly portrayed that the reader can smell wildflowers, marvel at the swarms of fireflies and feel the sting of the blood-thirsty insects. But the author's finest achievement is the evolution of Mike Bowditch himself.” —Bruce DeSilva, Associated Press for Knife Creek