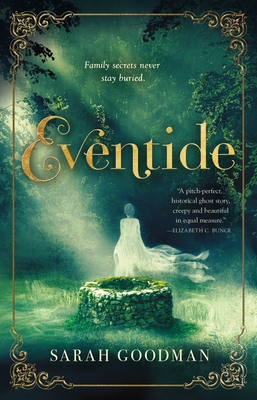 Verity and her sister, Lilah, find themselves on an orphan train to rural Arkansas where they are put up for adoption after their father descends into madness. The sisters are separated with Lilah being adopted by the local schoolmistress and Verity becoming an indentured servant of a kind, farming couple. They are welcomed into the town but all is not as peaceful as it initially seems. Why is everyone afraid of the forest and why is Verity drawn to it so much? When she discovers the eerie well at the center of the forest the secrets begin to unravel. Who IS the sweet lady who has adopted Lilah?

Now in paperback! Eventide is an evocative YA historical fantasy thriller by debut author Sarah Goodman, for fans of Jennifer Donnelly and Libba Bray.

When their father descends into madness after the death of their mother, Verity Pruitt and her little sister Lilah find themselves on an orphan train to rural Arkansas.

In Wheeler, eleven-year-old Lilah is quickly adopted, but seventeen-year-old Verity is not. Desperate to stay close to her sister, Verity indentures herself as a farmhand. But even charming farm boy Abel Atchley can’t completely distract her from the sense that something is not quite right in this little town. Strange local superstitions abound, especially about the eerie old well at the center of the forest. The woods play tricks, unleashing heavy fog and bone-chilling cold . . . and sometimes visions of things that aren’t there.

But for Verity, perhaps most unsettling of all is the revelation that her own parents have a scandalous history in this very town. As she tries to unearth the past, sinister secrets come with it—secrets that someone will go to violent lengths to protect . . .

Sarah Goodman is a former newspaper writer who lives with her husband and three children in a town of 280 people and several thousand cows. Despite growing up on a farm, she remains leery of all barnyard fowl. When she's not writing, Sarah enjoys going for runs with her dogs and drinking not-too-sweet-tea. Eventide is her first novel.

“Eventide is my favorite sort of book: a pitch-perfect historical ghost story, creepy and beautiful in equal measure. I am looking forward to whatever Sarah Goodman brings us next!” —Elizabeth C. Bunce, Morris Award-winning author