Things You Save in a Fire: A Novel (CD-Audio) 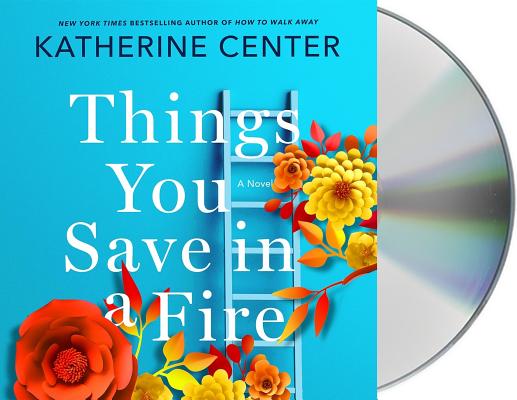 Cassie Hanwell has the perfect job as a firefighter. She's strong, smart and feeds on the energy of heading into danger when everyone else flees it. When her estranged mother reaches out and asks Cassie to move from Austin to Boston for a year, Cassie reluctantly agrees and discovers that the tough, old-school Boston firehouse is incredibly different from her job in Austin. She's the first woman assigned to the station which means hazing, working harder than two men and never having romantic thoughts about the rookie firefighter who starts when she does. We can see what's coming before Cassie does and Katherine Center tells this story in a lovely way, complete with humor and heart.

“You will cheer for tough-as-nails firefighter Cassie Hanwell, cry for her, mentally will her on, and celebrate with her at the end. Things You Save in a Fire effortlessly captures the realities of modern American women while at the same time radiating a contagious positivity. Reading Katherine Center is your pleasurable antidote for the daily news cycle.”
— Jill Hendrix, Fiction Addiction, Greenville, SC

From the New York Times bestselling author of How to Walk Away comes a stunning new audiobook about courage, hope, and learning to love against all odds.

Cassie Hanwell was born for emergencies. As one of the only female firefighters in her Texas firehouse, she's seen her fair share of them, and she's a total pro at other people's tragedies. But when her estranged and ailing mother asks her to give up her whole life and move to Boston, Cassie suddenly has an emergency of her own.

The tough, old-school Boston firehouse is as different from Cassie's old job as it could possibly be. Hazing, a lack of funding, and poor facilities mean that the firemen aren't exactly thrilled to have a "lady" on the crew—even one as competent and smart as Cassie. Except for the infatuation-inspiring rookie, who doesn't seem to mind having Cassie around. But she can't think about that. Because love is girly, and it’s not her thing. And don’t forget the advice her old captain gave her: Never date firefighters. Cassie can feel her resolve slipping...and it means risking it all—the only job she’s ever loved, and the hero she’s worked like hell to become.

Katherine Center's Things You Save in a Fire is a heartfelt and healing tour-de-force about the strength of vulnerability, the nourishing magic of forgiveness, and the life-changing power of defining courage, at last, for yourself.

Praise for Things You Save in a Fire:

"Oh, how I love Katherine Center’s writing…and her newest novel is a gem...a story that reminds us that the word emergency has, at its heart, a new beginning. Just read it, and thank me later.” - Jodi Picoult, New York Times bestselling author

“...a sharp and witty exploration of love and forgiveness that is at once insightful, entertaining, and thoroughly addictive.” - Kirkus, starred review

Katherine Center is the author of several novels about love and family: The Bright Side of Disaster, Everyone Is Beautiful, Get Lucky, and The Lost Husband. Her books and essays have appeared in Redbook, People, USA Today, Vanity Fair, and Real Simple—as well as the anthologies Because I Love Her, CRUSH, and My Parents Were Awesome. Katherine is a graduate of Vassar College and the University of Houston's Creative Writing Program. She lives in Houston with her husband and two sweet children.