Pinocula (The Creature from My Closet #3) (Paperback) 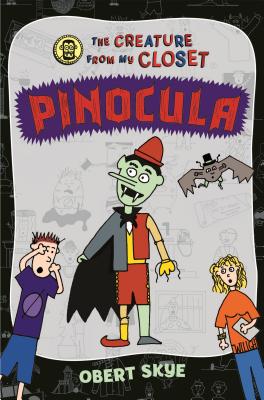 This is book number 3 in the The Creature from My Closet series.

What do you get when you cross Pinocchio and Dracula into one bizarre creature? Pinocula, of course!

For Rob Burnside, things are going pretty well. His friends are behaving, school isn't too bad, his family's getting along, and Janae, the girl of his dreams, occasionally notices him. Yep, life's okay—until the lying starts. Meet Pinocula, the new creature from Rob's closet. He is a liar and a jokester and is determined to drive Rob crazy.

Obert Skye doesn't let his fans down in this hilarious, illustrated installment of the middle grade The Creature from My Closet series, which started with Wonkenstein and Potterwookiee.

“Comfy antics for readers who don't probably much like reading—which, one thinks, is exactly the point.” —Kirkus Reviews on Wonkenstein

“Quite funny and has a lot of laugh-out-loud moments.... The idea of a hybrid Willy Wonka/Frankenstein character is original and hilarious.” —School Library Journal on Wonkenstein

“Filled with spot-on commentary and a wince-inducing supporting cast, middle grade guys won't be able to keep Wonkenstein to themselves.... This pitch-perfect offering should appeal to reluctant readers, not to mention the legion Wimpy Kid fans.” —Shelf Awareness on Wonkenstein