From the Desk of Zoe Washington (MP3 CD) 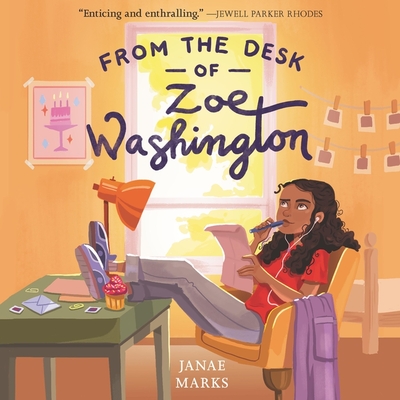 Twelve year old, Zoe Washington, is a baker at heart who has a great deal on her mind. This touching story opens with Zoe receiving a letter from her biological father, Marcus, a man she only knows as a convicted murderer. Zoe starts corresponding with Marcus all while being an intern at Ari's bakery and creating a new cupcake recipe. Over music and a shared love of cooking, Zoe starts bonding with Marcus at the same time she's figuring out how to avoid her neighbor and former best friend, Trevor. Soon Zoe's life becomes a tangle of lies as she attempts to get to know more about her birth dad, and secrets from all angles overtake her life causing her to mistrust her own parents. Zoe, eventually with the help of Trevor, goes to great lengths to learn more about possible injustices at the center of her birth dad's conviction. Multiple layers of mystery plus a high dose of friendship and love mix throughout this terrific book. Engaging and empowering.... a must read!

“Zoe Washington is my new favorite middle-grade heroine! When she receives a letter from Marcus, her birth father, on her 12th birthday, Zoe begins corresponding with him in secret. Marcus is in prison for a crime he says he didn’t commit, and Zoe is determined to find out the truth while also trying to excel in her baking internship and manage middle-school friendship drama with her neighbor Trevor. In her excellent debut novel, Marks skillfully balances a difficult social justice theme with lighthearted elements and lovingly rendered familial relationships.”
— Anna Millsaps, bbgb books, Richmond, VA

From debut author Janae Marks comes a captivating mystery full of heart, as one courageous girl questions assumptions, searches for the truth, and does what she believes is right--even in the face of great opposition. A perfect book for fans of Front Desk and All Rise for the Honorable Perry T. Cook

Zoe Washington isn't sure what to write. What does a girl say to the father she's never met, hadn't heard from until his letter arrived on her twelfth birthday, and who's been in prison for a terrible crime?

A crime he says he never committed.

Could Marcus really be innocent? Zoe is determined to uncover the truth. Even if it means hiding his letters and her investigation from the rest of her family. Everyone else thinks Zoe's worrying about doing a good job at her bakery internship and proving to her parents that she's worthy of auditioning for Food Network's Kids Bake Challenge.

But with bakery confections on one part of her mind, and Marcus's conviction weighing heavily on the other, this is one recipe Zoe doesn't know how to balance. The only thing she knows to be true: Everyone lies.