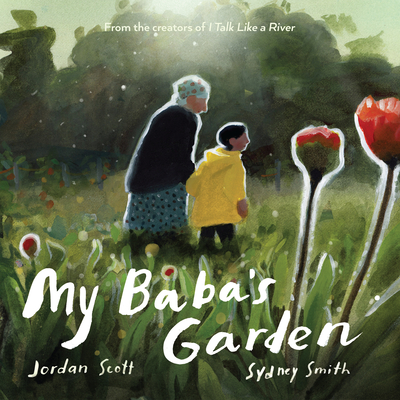 Every day, the boy gets dropped off at his Baba's house on the way to school. She makes him breakfast and walks him to school — the love is there in the words and on the page. One day, Baba moves in with the boy's family and he cares for her in return. A gorgeous ode to love between a grandparent and a grandchild.

The special relationship between a child and his grandmother is depicted in this sumptuous book by an award-winning team.

Inspired by memories of his childhood, Jordan Scott's My Baba’s Garden explores the sights, sounds, and smells experienced by a child spending time with their beloved grandmother (Baba), with special attention to the time they spent helping her tend her garden, searching for worms to keep it healthy. He visits her every day and finds her hidden in the steam of boiling potatoes, a hand holding a beet, a leg opening a cupboard, an elbow closing the fridge, humming like a night full of bugs when she cooks.

Poet Jordan Scott and illustrator Sydney Smith’s previous collaboration, I Talk Like a River, which received a Boston Globe-Horn Book Award expored a cherished memory shared between a father and son. In their new book, they turn that same wistful appreciation to the bond between a boy and his grandmother. Sydney Smith’s illustrations capture the sensational impressions of a child’s memory with iconic effect.

Jordan Scott is a poet whose work includes Silt, Blert, DECOMP, and Night & Ox.  Blert, which explores the poetics of stuttering, is the subject of two National Film Board of Canada projects, Flub and Utter: a poetic memoir of the mouth and STUTTER. Scott was the recipient of the 2018 Latner Writers’ Trust Poetry Prize for his contributions to Canadian poetry. I Talk Like a River is Scott’s first book for children. He lives in the Comox Valley on Vancouver Island with his wife and two sons.


Sydney Smith is an illustrator of picture books whose work includes Sidewalk Flowers by JonArno Lawson; The White Cat and the Monk by Jo Ellen Bogart; and Town Is by the Sea by Joanne Schwartz, which was awarded the 2018 Kate Greenaway Medal and the 2018 Children's Literature Award. He both wrote and illustrated Small in the City, which Kirkus Reviews called "Extraordinary, emotional, and beautifully rendered." in a starred review. School Library Journal said "The use of line, reflection, and perspective masterfully evoke a bustling gray city." in another starred review. Travis Jonker of 100 Scope Notes, a School Library Journal blog, said "Small in the City is one of my favorite books of 2019." His accolades include two Governor General's Awards for Illustrated Children's Books and four successive New York Times Best Illustrated Children's Book of the Year citations.

★  "Together, Scott and Smith create a portrait of a love which needs few words."—Publishers Weekly, Starred Review

"Heart-tugging. . . . Smith is an illustrator well suited to capturing a nonverbal bond. As in I Talk Like a River, his dense watercolor and gouache art has a shimmery, textured richness. . . . My Baba's Garden hints at themes like immigration, poverty, loss and the end of life, but the narrative works beautifully at its most basic level: it's a love letter from a grandchild to a grandparent."—Shelf Awareness