Revolutions of All Colors (Hardcover) 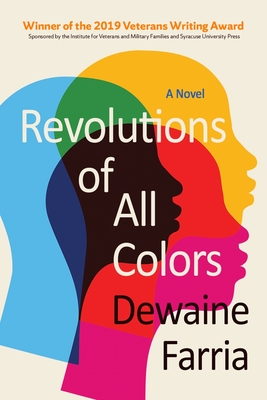 Gabriel Mathis, a twenty-three-year-old aspiring fantasy writer and reluctant Russophile, travels to Ukraine to teach English and meets the love of his life: an international arms dealer very much out of his league. Simon--a former Special Forces medic, torn over a warped sense of duty and a child he did not want--returns to the US to pursue his dream of becoming a mixed martial artist. After spending his adolescence defending his bisexuality, Michael makes his mark in New York's fashion industry while nursing resentment for a community that never accepted him.

Farria traces the lives of brothers Michael and Gabriel and their friend Simon from adolescence to their mid-twenties, through Oklahoma, Afghanistan, New York, Somalia, Ukraine, and New Orleans. Revolutions of All Colors is a brash, funny, and honest look at the evolution of characters we don't often see--black nerds and veterans bucking their community's rigid parameters of permissible expression while reconciling love of their country with the injustice of it. At its core, this is a novel about the uniquely American dilemma of chiseling out an identity in a country still struggling to define itself.

Dewaine Farria's writing has appeared in the New York Times, CRAFT, Rumpus, the Southern Humanities Review, and on the Afropunk website. He is a coeditor at the Maine Review. He holds an MA in international and area studies from the University of Oklahoma and an MFA in creative writing from the Vermont College of Fine Arts. As a US Marine, Farria served in Jordan and Ukraine. Besides his stint in the military, Farria has spent most of his professional life working for the United Nations, with assignments in the Russian North Caucasus, Kenya, Somalia, and Occupied Palestine.