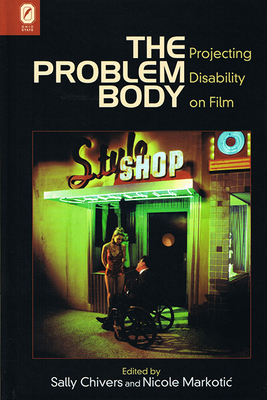 In The Problem Body, editors Sally Chivers and Nicole Markotic bring together the work of eleven of the best disability scholars from the U.S., the U.K., Canada, and South Korea to explore a new approach to the study of film by concentrating on cinematic representations of what they term “the problem body.” The book is a much-needed exploration of the projection of disability on film combined with a much-needed rethinking of hierarchies of difference. The editors turned to the existing corpus of disability theory with its impressive insights about the social and cultural mediation of disabled bodies. They then sought, from scholars at every stage of their careers, new ideas about how disabled bodies coexist with a range of other bodies (gendered, queered, racialized, classed, etc.).

To call into question why certain bodies invite the label “problem” more frequently than other bodies, the contributors draw on scholarship from feminist, race, queer, cultural studies, disability, and film studies arenas. In Chivers and Markotic’s introduction, they draw on disability theory and a range of cinematic examples to explain the term “problem body” in relation to its projection. In explorations of film noir, illness narratives, classical Hollywood film, and French film, the essays reveal the “problem body” as a multiplication of lived circumstances constructed both physically and socially.

“A little feast of scholarship, this collection establishes disability as a “player” in film theory and invites interrogation of this discourse on projections of so-called problem bodies. Highly recommended.” —Choice