A Fever in the Heartland: The Ku Klux Klan's Plot to Take Over America, and the Woman Who Stopped Them (Hardcover) 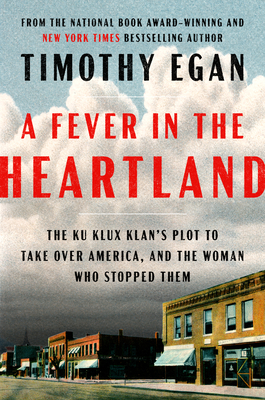 Although this is primarily the story of one evil man who became very powerful in 1920s Indiana, it is also an exposé of the zeitgeist of the 1920s, a decade that saw Prohibition, a harsh new anti-immigration law, and a rebirth of the Ku Klux Klan in America's midwest. D.C. Stephenson was a con artist who became possibly the most powerful man in Indiana politics in the 1920s by attaching his personal charisma to the resurgent KKK movement and then buying judges, local politicians, police and even church leaders. As a Grand Dragon, the "Americanism" he preached was about the hatred of anyone who wasn't White, Anglo-Saxon, and Protestant. In his private life, Stephenson was a liar, a cheat, a wife-deserter, a lush, and a predator of women. One of his attempted conquests was Madge Oberholtzer. Stephenson's brutal physical attack on Oberholtzer eventually led to his arrest for murder, followed by a trial that revealed Stephenson's true character to the public. Whether or not this revelation led to the subsequent weakening of the Klan's hold on the minds of Indiana's population, it destroyed Stephenson's control of Indiana politics. Recommended especially to those interested in early 20th century U.S. history.

"With meticulous detective work, Timothy Egan shines a light on one of the most sinister chapters in American history—how a viciously racist movement, led by a murderous conman, rose to power in the early twentieth century. A Fever in the Heartland is compelling, powerful, and profoundly resonant today." -- David Grann, author of THE WAGER and KILLERS OF THE FLOWER MOON

A historical thriller by the Pulitzer and National Book Award-winning author that tells the riveting story of the Klan's rise to power in the 1920s, the cunning con man who drove that rise, and the woman who stopped them.

The Roaring Twenties--the Jazz Age--has been characterized as a time of Gatsby frivolity. But it was also the height of the uniquely American hate group, the Ku Klux Klan. Their domain was not the old Confederacy, but the Heartland and the West. They hated Blacks, Jews, Catholics and immigrants in equal measure, and took radical steps to keep these people from the American promise. And the man who set in motion their takeover of great swaths of America was a charismatic charlatan named D.C. Stephenson.

Stephenson was a magnetic presence whose life story changed with every telling. Within two years of his arrival in Indiana, he’d become the Grand Dragon of the state and the architect of the strategy that brought the group out of the shadows – their message endorsed from the pulpits of local churches, spread at family picnics and town celebrations. Judges, prosecutors, ministers, governors and senators across the country all proudly proclaimed their membership. But at the peak of his influence, it was a seemingly powerless woman – Madge Oberholtzer – who would reveal his secret cruelties, and whose deathbed testimony finally brought the Klan to their knees.

A FEVER IN THE HEARTLAND marries a propulsive drama to a powerful and page-turning reckoning with one of the darkest threads in American history.

Timothy Egan is a Pulitzer Prize—winning reporter and the author of nine other books, most recently the highly acclaimed A Pilgrimage to Eternity and The Immortal Irishman, a New York Times bestseller. His book on the Dust Bowl, The Worst Hard Time, won a National Book Award for Excellence in Nonfiction. His account of photographer Edward Curtis, Short Nights of the Shadow Catcher, won the Carnegie Medal for nonfiction.

"With narrative elan, Egan gives us a riveting saga of how a predatory con man became one of the most powerful people in 1920s America, Grand Dragon of the Ku Klux Klan, with a plan to rule the country—and how a grisly murder of a woman brought him down. Compelling and chillingly resonant with our own time." —Erik Larson, author of The Splendid and the Vile

"Egan has done it again, mastering another complicated American story with authority and surprising detail.  The Klan here are not the nightriders of the late 19th century, but a retooled special interest group and unusually potent political power. The influence they wielded over states and policy should put a chill in every American. Bravo.” —Ken Burns

"With meticulous detective work, Timothy Egan shines a light on one of the most sinister chapters in American history—how a viciously racist movement, led by a murderous conman, rose to power in the early twentieth century. A Fever in the Heartland is compelling, powerful, and profoundly resonant today." —David Grann, author of The Wager and Killers of the Flower Moon